The Euro has lost a significant amount of ground against the commodity-sensitive Norwegian Krone and Canadian Dollar in the first quarter of 2021. The EUR/NOK and EUR/CAD exchange rates declined 4.5% and 4.9% respectively. These losses appear to stem from the divergence in the European Central Bank’s outlook for monetary policy compared to the Bank of Canada and the Norges Bank.

The ECB moved to increase the pace of its emergency-bond buying program at its monetary policy meeting in March, to dampen the marked rise in government bond yields and preserve easy financing conditions. In stark contrast, Norway’s central bank has stated that it will start raising interest rates at the back end of this year, while the BoC is expected to taper its quantitative easing program further at its April meeting. These dynamics will likely weigh on both exchange rates in the near term.

Additionally, the accelerating distribution of coronavirus vaccinations globally bodes well for a return in overall mobility and in turn demand for oil, which will likely keep the price of the commodity elevated over the coming months. This may underpin the commodity-linked NOK and CAD, and pave the way for additional gains against the lower-beta EUR in the second quarter. 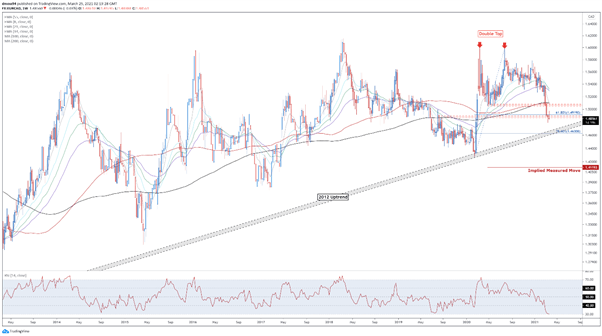 Technically, EUR/CAD rates seem poised to extend recent declines, as prices snap below the sentiment-defining 200-MA (1.5106) and the neckline of a Double Top reversal pattern carved out in the first half of 2020.

With the slopes of all six moving averages steepening lower, and the RSI eyeing a push into oversold territory for the first time since 2012, the path of least resistance looks skewed to the downside.

A weekly close below psychological support at 1.4800 would probably intensify selling pressure and carve a path for the exchange rate to probe confluent support at the uptrend extending from the 2012 lows and the 78.5% Fibonacci (1.4631).

Hurdling that brings the 2020 low (1.4264) into play, with the Double Top implied measured move suggesting the exchange rate could exceed that and challenge the 1.4100 handle. 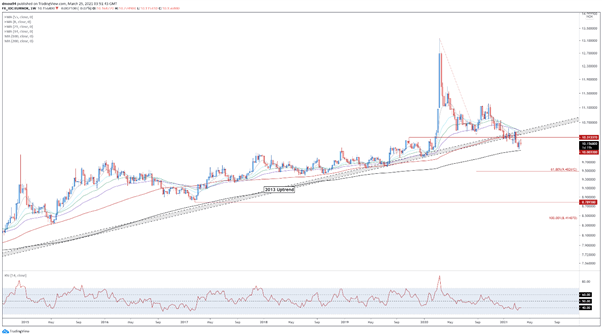 EUR/NOK’s break below the uptrend that has guided price higher since 2013 suggests that the exchange rate could slide significantly lower over the coming months.

With the RSI diving to its lowest levels since 2017, and the short-term moving averages slicing below the 55-EMA, bearish momentum appears to be intensifying.

A weekly close below the sentiment-defining 200-MA is required to validate bearish potential, with a push to challenge the 61.8% Fibonacci (9.4826) probably coinciding with the RSI breaking into oversold territory for the first time in a decade.