US services activity in March rose to a pandemic high as the March ISM Services PMI printed at 63.7, strongly exceeding the forecast of 59. The print is the ISM Services PMI’s highest on record since its component data began to be collected in 1997. In February, the Services PMI fell to its lowest level since May of 2020 as extreme weather prevented typical services activity. March’s resurgence reflects that February’s dip was not the beginning of a downtrend and instead shows continued strength from the US economy. 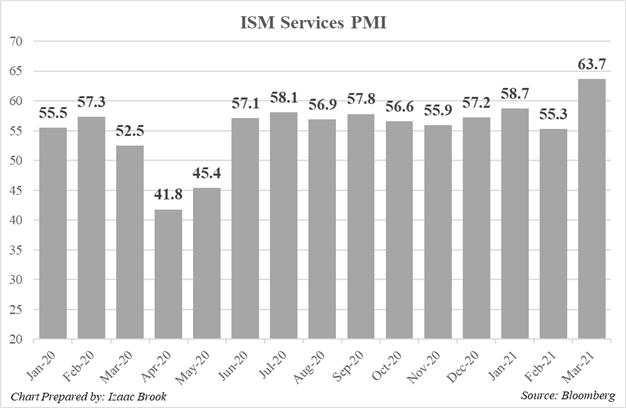 Services activity accounting for around 75% of US GDP, and the Services PMI serves as an important proxy for GDP data, giving markets a closer and more timely look at this key component of the US economy. PMI prints above 50 denote an expansion and below 50 denote a contraction.

March’s strong Services prints are further signs that the US economic recovery is continuing to strengthen. March’s ISM Manufacturing report saw manufacturing PMIs hit their highest level since 1983 as respondents across the board reported increased demand and activity. Nonfarm payrolls for March rose by 916k, their strongest increase since the summer. The Biden administration’s American Rescue Plan Act is beginning to impact the economy, providing a further boost to growth. With vaccination efforts continuing strongly, the US looks positioned for a strong H2 2021.

Heading into 2021, sentiment surrounding the US Dollar was bearish. This consensus reserved as US yields began to move higher, driving a resurgence in Dollar strength. From an early January low around 89.75, the DXY rose to a high above 93.40 in late March, its highest point since early November. Since hitting this high, the index has edged slightly lower. Ahead of the ISM Services print, the DXY dropped to a more than one week low near the 92.70 level. 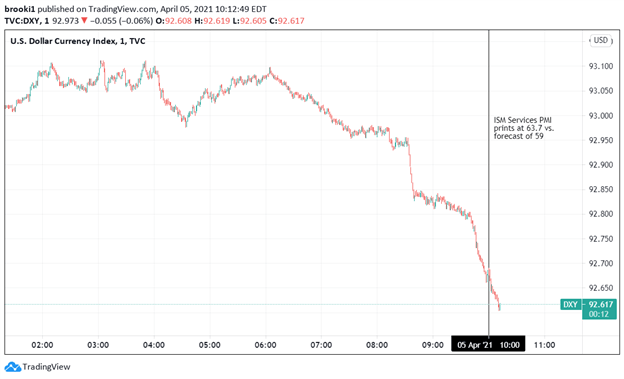 Despite the strong ISM services prints, the DXY continued to head lower in the immediate aftermath of the release. After hitting a fresh intraday low just above the 92.60 level, the DXY has rebounded slightly higher but remains at its lowest point since March 25th.