Perhaps the unprecedented nature of 2020 and the Coronavirus pandemic may one day be categorized as a Black Swan event. The virus came out of nowhere and triggered a global recession as economies the world-around were forced to shut down in near-immediate fashion. Central Banks intervened to stave off economic destruction and in the months since that focus has turned towards trying to drive growth. This has created some contortion around financial markets as investors attempt to shuffle ahead of a very uncertain future.

Although both the Federal Reserve and the Swiss National Bank (SNB) continue to provide high levels of accommodation, the rate divergence between the two economies will likely remain a factor. The Swiss National Bank has kept its benchmark at -0.75 basis points, whereas the Fed has continued to deny the possibility of negative rates in the US. Helping that theme along has been the continued drive-higher in yields out of the US, with investors gearing up for a possible faster return to normalcy as vaccines provide for hope on the horizon.

So, even if the Fed does not hike rates anytime soon, a disparity will exist in the rate policy between the two economies, and this can continue to support the topside of USD/CHF.

Meanwhile, Europe’s vaccine roll-out program continues to lag that of the United States, which may further hinder Switzerland’s ability to recover at a faster pace than its US counterpart. Although the SNB has halted its exceptionally dovish policy, rates are expected to remain at -0.75%, making CHF more susceptible to periods of strong risk-on, risk off swings.

It was a remarkable change-of-pace in USD/CHF trends in Q1 of this year. After embarking on an aggressive 8-month span of weakness, USD/CHF finally found support coming into the New Year around the 0.8800 handle. And, like a light switch being flipped on, bulls came in, pushing the pair higher, and have continued to do so into quarter-end.

With rising yields supporting USD strength, bulls were able to drive prices to a fresh eight-month high before running into a wall of resistance formed by the 38.2% Fibonacci level. But bears were met with disappointment after the slight pullback in prices proved to be a mere correction before bullish continuation prevailed. Additionally, a series of higher highs and higher lows is indicative that the upward trajectory will continue as long as price action remains above the 20-Day Exponential Moving Average (EMA) currently providing support at a level of 0.9220. However, the Relative Strength Index (RSI) is poised to approach the 70-mark and should this cross into overbought territory, bears may have the opportunity to temporarily drive prices lower. 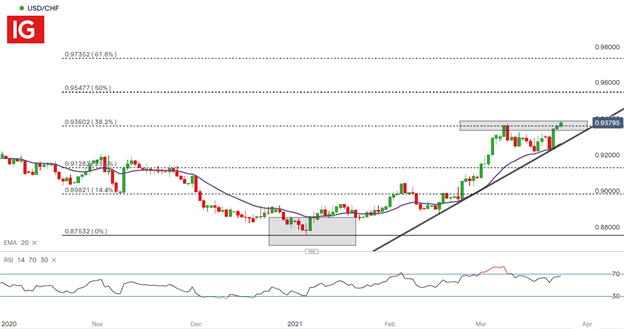 Going forward, I believe that the challenge for Central banks will be to ensure that the withdrawal of QE does not disrupt financial stability. Although it is probable that fundamentals will remain a prominent catalyst for USD/CHF price action for the duration of the year, I am swayed into believing that optimism may encourage further USD gains, with the systemic, persistent trend remaining relatively bullish.