The global economy is recovering at a rapid pace due to robust efforts from major governments to vaccinate their populations. Still, vaccine rollouts have been plagued with major problems, whether it be sourcing ingredients, regulatory hurdles or supply chain issues. The European Union faces an all too familiar problem that threatens to further limit its vaccination efforts: politics.

Europe is confronting an exodus of its vaccine production, with millions of doses being exported out of the region weekly. This has added to the bloc’s lackluster performance in its fight against the pandemic. EU leaders are now considering export bans, and the United Kingdom is the main target. A glance at data shows a stark contrast between the two, with the UK having vaccinated a little over half of its population as of late March compared to just 1 out of every 10 EU citizens.

French President Emmanuel Macron and Italian Prime Minister Mario Draghi favor the hardline stance of blocking vaccine exports. German Chancellor Angela Merkel prefers to avoid a tit-for-tat battle with the UK. If history is a lesson, it tells us that these differences between EU leaders will not be sorted out overnight. Limiting vaccine exports would likely result in UK retaliation, possibly in the form of blocking ingredients necessary for vaccine production. If that were to happen, it would wreak havoc on the EU’s complex supply chains.

Adding to the bloc’s troubles is its lagging the economic recovery, compared to peer nations. Australia is a notable example and one that provides a potential opportunity to trade in EUR/AUD. Evidenced by the comparative PMI figures (seen in the chart below), the Australian economy’s recovery has outperformed the EU’s own post-pandemic revival. This is likely to continue. The economic disparity may even accelerate if the EU continues to fumble its vaccine rollout. 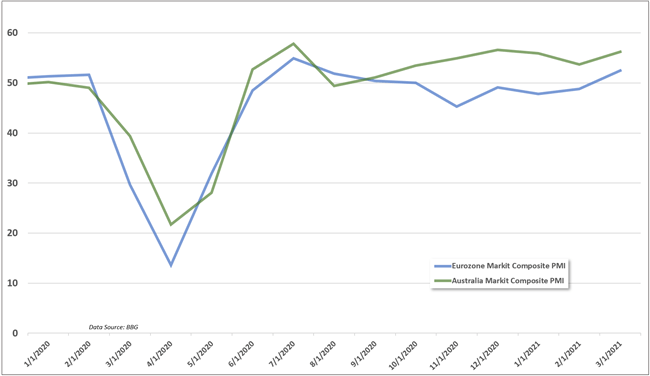 The rate policy between the European Central Bank (ECB) and the Reserve Bank of Australia (RBA) only serves to exacerbate EUR/AUD’s downward path following the October 2020 swing high. The ECB is backed into a much tighter corner regarding its monetary situation versus the RBA. When looking at policy structure and economic conditions, it is reasonable to forecast that the RBA will enter a tightening phase before the ECB. Altogether, EUR/AUD will likely continue to drift lower throughout the second quarter – especially if we see the EU continue to fumble its vaccine rollout. 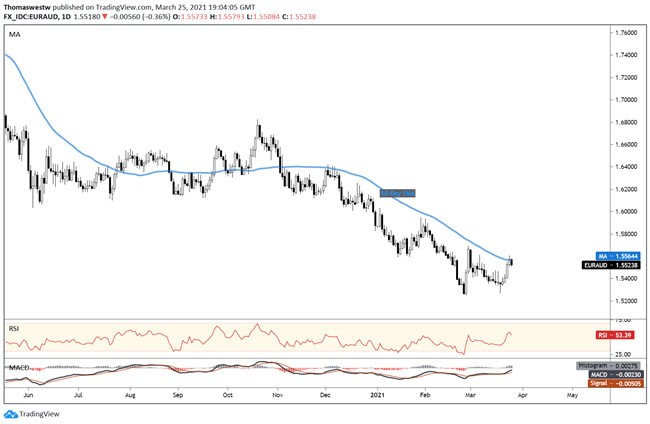