The Australian Dollar appreciated against its US counterpart during the first quarter of 2021 with AUD/USD briefly trading above the 0.8000 handle in February. But now the recovery in longer-dated US Treasury yields appears to be dragging on the AUD/USD exchange rate. The Reserve Bank of Australia (RBA) acknowledges that “the rise in longer-term government bond yields in advanced economies over preceding months had predominantly reflected an increase in compensation for future inflation.”

The minutes from the RBA’s March meeting goes on to say that although central banks had not announced material changes to their asset purchase plans or guidance on policy rates since the previous meeting, market participants had brought forward their expectations for an increase in policy rates in a number of economies, including Australia. The Board notes that the change appeared to be sooner than implied by market expectations and central banks’ forward guidance. The comments suggest the RBA is in no rush to switch gears as “inflation was expected to remain below 2 per cent over both 2021 and 2022.” It seems as though the central bank plans to overlook a transitory rise in price growth as officials insist that it would be some years before the Bank's goals for inflation and unemployment are achieved.

Recommended by David Song
Download the fullAUD 2Q forecast!
Get My Guide

As a result, the RBA may continue to utilize its quantitative easing (QE) program throughout 2021 as ”a further $100 billion will be purchased following the completion of the initial program.” It also seems as though Governor Philip Lowe and Co. are on a pre-set course as the board pledges to not increase the cash rate until actual inflation is sustainably within the 2-3% target range. 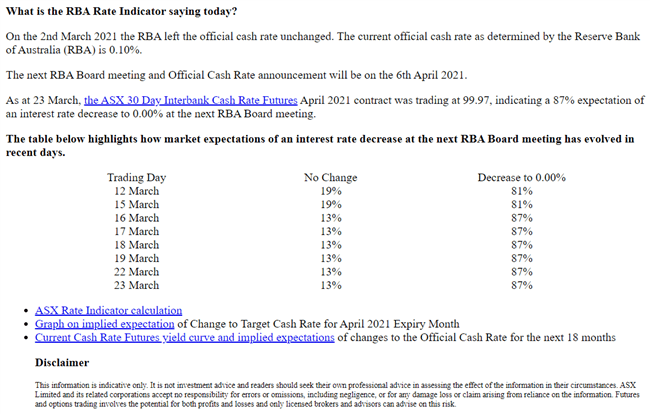 However, the ASX 30 Day Interbank Cash Rate Futures reflects speculation for an RBA rate cut, with the April 2021 contract indicating a 87% expectation of an interest rate decrease to 0.00% at the next RBA Board meeting.

It remains to be seen if the RBA will provide additional monetary support in 2021 as the Board called a negative policy rate “extraordinarily unlikely.” Governor Lowe and Co. may retain a wait-and-see approach throughout the first half of the year as the central bank relies on its emergency tools to achieve its policy targets.

In turn, the Australian Dollar may continue to exhibit the bullish price action seen earlier this year as major central banks remain reluctant to scale back their non-standard measures. Key market themes may continue to influence AUD/USD as the US Dollar broadly reflects an inverse relationship with investor confidence.

Federal Reserve forecasts indicate the Federal Open Market Committee (FOMC) is on a similar path to the RBA as officials see the benchmark interest rate staying close to zero through 2023. The wait-and-see approach for monetary policy may keep AUD/USD afloat as long as the Fed stays on track to increase its holdings of Treasury securities by at least $80 billion per month and of agency mortgage-backed securities by at least $40 billion per month. 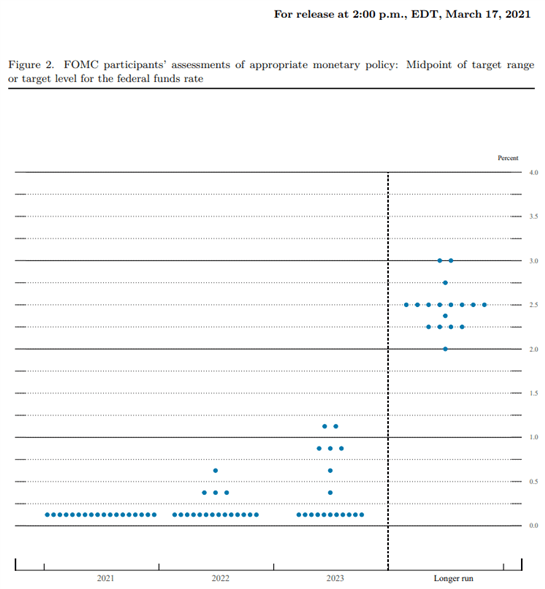 It looks like the FOMC will do little to curb the rise in US Treasury yields. The central bank insists that the recovery has “progressed more quickly” than generally expected. Fed officials may strike a less dovish tone over the coming months as “forecasts from FOMC participants for economic growth this year have been revised up notably since our December Summary of Economic Projections (SEP).”

In turn, a further rise in longer-dated US Treasury yields may produce headwinds for AUD/USD ahead of the next Fed interest rate decision on April 28. More of the same from Chairman Jerome Powell may keep key market trends in place as the next SEP update comes in June.

With that said, the near-term pullback in AUD/USD may turn out to be a correction in the broader trend rather than a change in behavior as the FOMC retains a dovish forward guidance. The Australian Dollar may continue to exhibit a bullish behavior in the second quarter of 2021 as the RBA follows its pre-set course.