Everything in the financial markets is relative. Growth potential, rates of return and safety are all considerations which urge capital to flow to one region or asset class over another according to prevailing conditions in the markets. Given its ubiquity, the US Dollar often finds itself a bridge to these shifting winds - for better and worse. Through the opening quarter of 2021, there were significant changes in focus from an incredible charge in retail appetite to anticipation for reopening economies after mass vaccinations to burgeoning inflation expectations that have fed into central bank normalization hopes/fears.

Recommended by John Kicklighter
Download the full USD 2Q Forecast!
Get My Guide

In these competitive matters, the US has set the pace which in turn set a bullish path for the Greenback almost from the very start of the year. If these same matters hold the market's reins, the Dollar is in a commanding position to reap the benefits. Alternatively, if a wrench is thrown into the gears and fear sudden resurfaces across the market, the same currency's latent safe haven status can readily draw global capital looking for harbour - particularly after Treasuries put in for meaningful pullback from record highs.

A Growth Outlook to Impress

In the past year, the global economy has recovered remarkably. While we haven't fully returned to the levels of economic output registered before the pandemic swept in, the reversal of fortunes has proven as incredible as the pace of collapse that came with a forced shutdown of economies. As far as tempo goes, the United States contracted approximately -3.5 percent through 2020 - though annual growth through the fourth quarter alone was a fairly robust 4.3 percent. Looking ahead, the IMF has predicted that the world's largest economy is anticipated to grow an impressive 5.1 percent - faster than the Eurozone, Japan, United Kingdom and a host of other developed world leaders. Further, with a pace of vaccinations against the coronavirus through the end of the quarter surpassing 100 million in the US, the country is well on its way to reopen to further boost its heavily services-based economy. With so much capital sloshing around the system and speculative appetite hardly missing a beat during the pandemic, the appeal of a relative growth advantage will draw serious appeal from international investors. 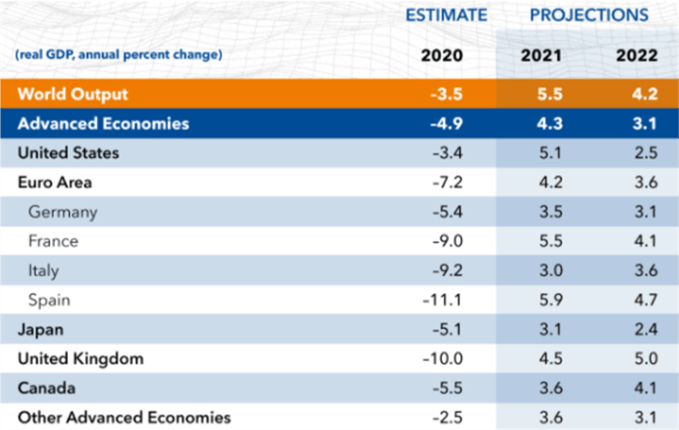 Yields and the Fed

Rates of return aren't the only factor to feel the lift from economic windfall. Inflation expectations have similarly powered higher through this past quarter. In fact, the five-year breakeven inflation rate, often referred to as a market projection of price pressures, pushed above 2.5 percent to the highest level since 2008. Naturally, the market has translated this pick-up into anticipation for interest rate hikes from the Federal Reserve given that controlling inflation is one the group's principal mandates. Chairman Jerome Powell and his Committee made clear multiple times that they would maintain extreme accommodation and even tolerate a scenario where inflation runs hot. However, the market has a history of disputing the group's views and assurances. Fed Fund futures projected 16 basis points worth of rate hikes through the end of 2022 (0.64 percent probability of one standard 25 bp hike). That may not seem remarkable, but the FOMC's own forecasts project no change clear through 2023 and other major central banks have suppressed expectations even more aggressively - even well-known 'carry currencies'. 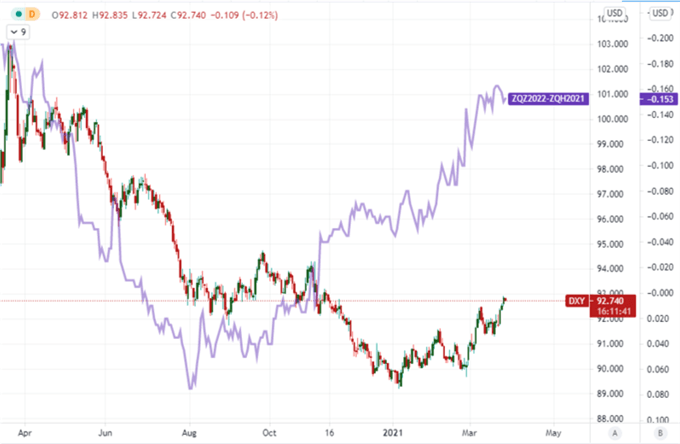 In Case of Emergency

Favorable economic and sentiment winds would put the US in an advantageous position even if we were simply to project the circumstances from the first quarter without any further change. Of course, there are additional considerations that could come into play for the second quarter such as the anticipation of an infrastructure program. On the heels of a $1.9 trillion coronavirus stimulus program, the Biden administration was working on a subsequent infrastructure bill (a concept floated for many years) that was reported to be in the $3 trillion to $4 trillion range. That could be a further amplifier. This taken into consideration, however, there remains a critical feature of the Greenback even if it lies dormant in certain market conditions: its safe haven appeal. As the world's most liquid currency backed by one of the most renowned risk-free assets in US Treasuries, the USD always stands ready to absorb the inflows for government debt and money markets should another financial tsunami strike. It certainly is not a fool proof haven. A middling retreat in speculative appetite or a crisis that was largely contained to the US could send capital fleeing. However, given the circumstances of central bank largesse and speculative over-indulgence, it is likely conditions would go fully off the rails rather than simply peter out.