Silver investors may get a big driver this week in the form of US President Biden’s infrastructure-focused stimulus announcement. Mr. Biden will outline his plan in Pittsburgh on Wednesday, according to White House administration officials. To avoid GOP resistance, the infrastructure plan will reportedly be separate from other priority legislation such as healthcare and child care funding, according to Biden aides cited in the Wall Street Journal.

Silver may benefit from the announcement, with many looking at the precious metal – which also has applications in industry – to be an inflation hedge. However, market-based inflation expectations implied in breakeven rates have continued to move higher even as silver veered off downward recently. Divergence may continue until a realized inflationary pickup is reflected in CPI and PCE figures.

Regardless, the plan, which will focus on roads, bridges, airports, and green energy initiatives, will most likely be larger in size than any similar initiative before it. Many are estimating the size of the package to be in the trillions, likely near $3 trillion to start, although negotiations with Republicans – who worry about tax increases to fund the measures – may see the final total revised lower.

That said, inflation expectations are likely to rise further following this week’s announcement. Breakeven rates, which measure price growth expectations by tracking the difference between yields on nominal and inflation-adjusted Treasury bonds (TIPS), have been on the rise since crashing last March. Since Mr. Biden took office however, the 5-year breakeven has accelerated past the 10-year breakeven rate, a reflection of the new administration’s willingness to quickly spend more to stimulate the economy.

Overall, the pickup in inflation expectations may bode well for silver prices. An argument can be made that silver is merely in a phase of consolidation after a large run in 2020, and the upcoming green-focused infrastructure bill may be the catalyst needed to propel the metal to new heights. That may very well be the case, although any proposal will first need to test the waters in Congress. Given these points, silver investors will want to watch the Biden administration closely this week, particularly Wednesday’s announcement from the President himself. 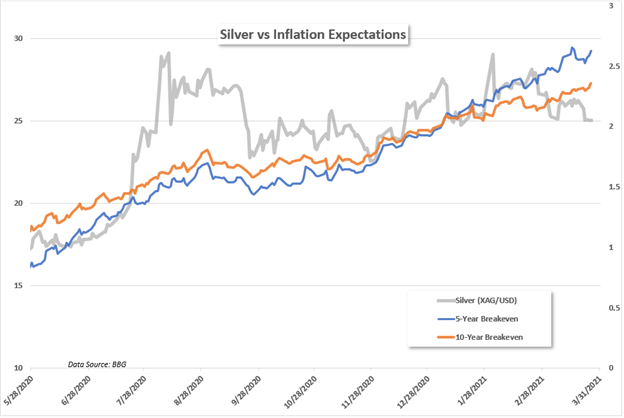 Silver is down nearly 6% on the month, and XAG/USD is now trading directly above its 200-day Simple Moving Average (SMA). So far, this key barrier appears to be providing a level of support, with prices remaining above the psychologically important 25 handle, which also coincides with the 78.6% Fibonacci retracement of the December to February move.

A break below the 200-day SMA would likely see additional selling pressure mount, perhaps with a move down to the 22.597 area that supported swings lower during the September and November selloffs last year. XAG/USD’s MACD oscillator is skewed to the bearish side as it trends lower. Alternatively, if prices continue to hold above support, a retest of trendline support from the March 2020 swing low remains on the cards to reestablish a bullish technical posture. 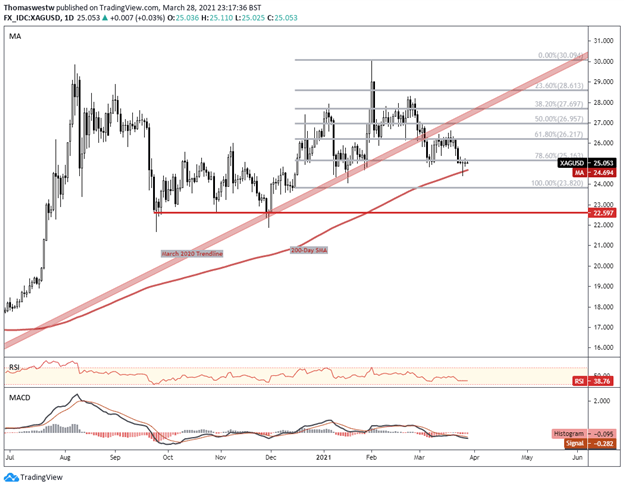