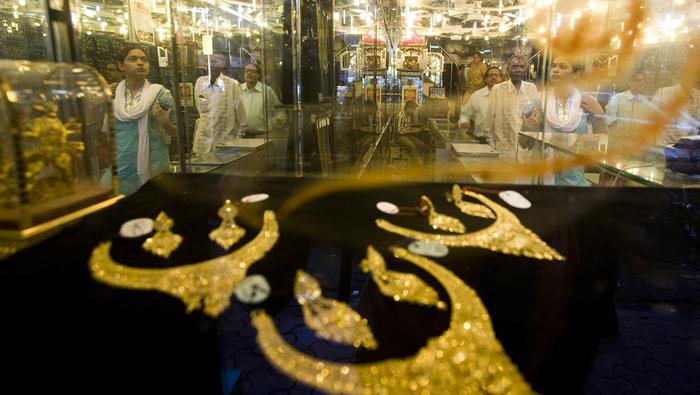 Gold prices traded modestly higher during Monday’s APAC morning session after falling for two days. A strengthening US Dollar appeared to be the primary weighing factor, while falling real yields helped to underpin prices. Crude oil prices plunged over 6% on Tuesday after Germany introduced an intensified lockdown going into Easter. A softer recovery outlook alongside a strengthening US Dollar may continue to weigh on energy prices.

A renewed wave of concerns surrounding Europe’s vaccine progress and new lockdown measures spooked risk appetite and buoyed demand for safety. As a result, the DXY US Dollar index advanced 0.65% to a two-week high of 92.40, exerting downward pressure on commodity prices. Meanwhile, the 10-year Treasury note price advanced for a third day as capital fled from risk assets into havens, pulling its yield lower. The real yield, as represented by the 10-year Treasury inflation-indexed security, has fallen to -0.69% from a 9-month high of -0.59%. A falling real yield may help to cushion bullion prices against the strengthening of the Greenback.

Fed Chair Jerome Powell reiterated his dovish stance and patience towards a transitory rise in inflation before the House Financial Service Committee on Tuesday. “We might see some upward pressure on prices. Our best view is that the effect on inflation will be neither particularly large nor persistent,” Mr. Powell said when addressing the potential impact of the $1.9 trillion stimulus package on inflation. His comments failed to calm the market however, with all three US equity indices ending lower amid fears about a potential third viral wave that hit Europe.

Crude oil prices tumbled over 6% on Tuesday, registering a four-day decline of 11% as a new wave of lockdown measures introduced in Germany, Italy and France dampened the outlook for energy demand. Traders were unwinding expectations for a full-blown recovery after oil prices registered an astonishing gain of 85% over the last four months. The next OPEC+ meeting scheduled on 1st April will be closely eyed for clues about the oil cartel’s take on recent changes in pandemic conditions and forward guidance for its output plan into summer.

The commodity-linked Australian and Canadian Dollars as well as the Norwegian Krone were weighed by falling crude oil prices, pointing to further strength in the Greenback. Against this backdrop, crude oil may struggle to find its way higher.

The American Petroleum Institute (API) reported a larger-than-expected build in crude oil inventories of 2.927 million barrels for the week ending March 19th. In the prior week, the institute reported a surprising 1 million barrels draw in stockpiles, compared to a baseline forecast of a 2.96 million barrels build.

The EIA crude oil inventory report set to be released on March 24th will also be closely watched by oil traders after four consecutive weeks of stockpile build. Although extreme weather conditions in February have resulted in a temporary disruption in refinery activity, operations have been restored rapidly. According to EIA’s summary of weekly petroleum data, US refiners operated at 76.1% of their capacity during the week ending March 12th, compared to 69% a week ago.

Gold prices have likely reversed higher into a minor “Ascending Channel” as highlighted in the chart below, signaling that near-term trend may have turned bullish. Price hit an immediate resistance level at US$ 1,743 (the 23.6% Fibonacci retracement) and has pulled back since. The MACD indicator is trending up higher after the formation of a bullish crossover, underpinning upward momentum.

The primary trend remains bearish-biased however, as suggested by the downward-sloped 50- and 100-day SMA lines, although the 20-day SMA seems to be flattening.

Crude oil prices failed to breach the 200% Fibonacci extension level (66.50) and has since entered a technical correction. Prices registered two long-rang bearish candlesticks over the last four trading sessions, pointing to strong selling pressure. The 10-day SMA line crossed below the 20-day line for the first time since November, signaling that the overall trend has likely reversed downward. An immediate support level can be found at the 55.22 (the 100% Fibonacci extension) whereas an immediate resistance can be seen at the 161.8% Fibonacci extension (62.19). The MACD indicator formed a bearish crossover and plunged sharply, suggesting that bearish momentum is dominating. 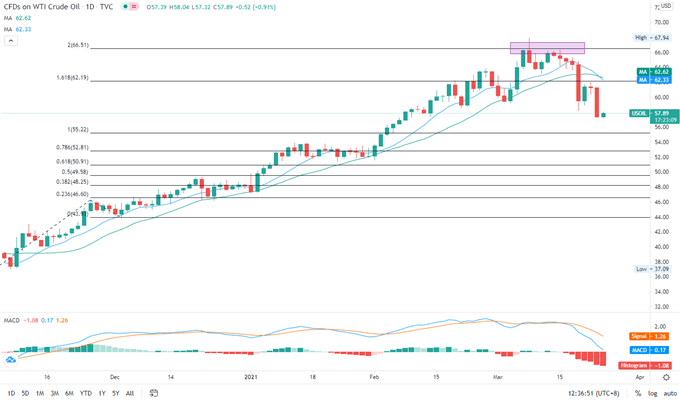