RISK-OFF DOMINATES SENTIMENT: the imminent threat of a third wave in Europe and the continued dispute about the effectiveness of the AstraZeneca vaccine has caused sentiment to sour in markets, with money flowing into safe-havens like the US Dollar and treasuries. Economic Data is also proving hard to crack as recent figures continue to show underlying weakness worldwide, despite the threat of rising inflation expectations on the back of better than expected economic recovery.

DXY RISES TO 4-MONTH HIGH: the US Dollar has been building on stronger bullish momentum for a few weeks now and the shy away from risk assets in yesterday’s session has seen the Dollar Basket push above recent resistance at 92.53, marking a new 4-month high as it edges towards the upper bound of its Bollinger range. We may see momentum build higher throughout today’s session but the bullish run is looking overstretched and the 93.00 mark is likely to offer some short-term resistance. 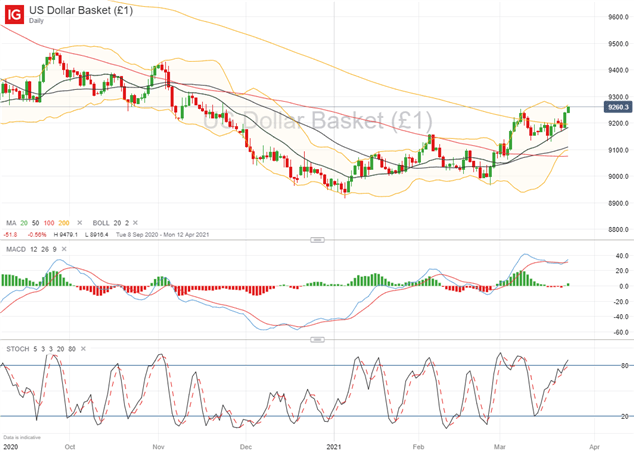 AUD, NZD UNDERPERFORMING: both the Australian Dollar and the New Zealand Dollar were the biggest underperformers in yesterday’s session, falling 1.78% and 1.95% respectively against the US Dollar. Both currencies are considered to be cyclical and enjoy enhanced flows when the economy is outperforming, especially sensitive to their close trade partners Asia, so a move away from risky assets poses a great threat to AUD/USD and NZD/USD. Both pairs had been consolidating in tight ranges in recent weeks in anticipation of a significant break in either direction, so their bearish run is not really a surprise.

AUD/USD: the recent pullback in commodity prices has also had a negative impact on the Australian Dollar, pushing AUD/USD to a 7-week low. The 4-hour chart shows that 9 out of the latest 10 candlesticks have seen a fall in price and this may continue as bears target the next big level at 0.7550. The start of the European session seems to have offered some support for the pair, marking a short-term reversal at 0.7583, and although the picture remains quite weak, we may see AUD/USD pick up buying momentum if it reverses towards 0.7640.

NZD/USD: the New Zealand Dollar has been relatively weaker than the Aussie in this recent pullback as The New Zealand government announced on Tuesday a series of measures to cool the housing market, easing pressure on the Reserve Bank of New Zealand (RBNZ) to raise rates. At this point sellers seem to remain in control of NZD/USD, pushing out any dip buyers. Current price has now broken below the swing level back in December 2020 at the 0.70 mark so we may see corrective pressure bring the pair down to the 200 SMA at 0.6925, at which point I expect sellers to cash in and buying momentum picking up again.