The Turkish Lira plummeted as much as 17% against the US Dollar at the start of a fresh week of trade, on the back of President Recep Tayyip Erdogan’s surprise decision to replace central bank governor Naci Agbal. Erdogan’s decision seems to have come on the heels of a larger-than-expected 200 basis-point interest rate hike by the Central Bank of the Republic of Turkey (CBRT) on Thursday, in an attempt to drive down inflation that currently sits above 15%.

However, with the President adhering to the notion that higher interest rates actually cause inflation, and frequently criticizing the central bank for keeping borrowing costs at elevated levels, it appears it was only a matter of time before Governor Agbal was asked to leave his post. Indeed, since Agbal accepted the head role at the CBRT in November 2020, the benchmark one-week repo rate has climbed by 875 basis-points.

These successive rate hikes resulted in the Lira gaining a significant amount of ground against the Greenback, with USD/TRY exchange rate falling just under 20% during Agbal’s tenure. That being said, the Lira may come under increasing pressure in the near term, given that Agbal’s successor – Sahap Kavcioglu – shares President Erdogan’s views on the relationship between interest rates and inflation.

Kavcioglu has previously stated that “the central bank shouldn’t insist on high interest rates” and that hiking rates would “indirectly open the way to increasing inflation”. Therefore, market participants may begin to price in the possibility of lower interest rates in the coming months, and in turn discount the Lira against its US Dollar counterpart. 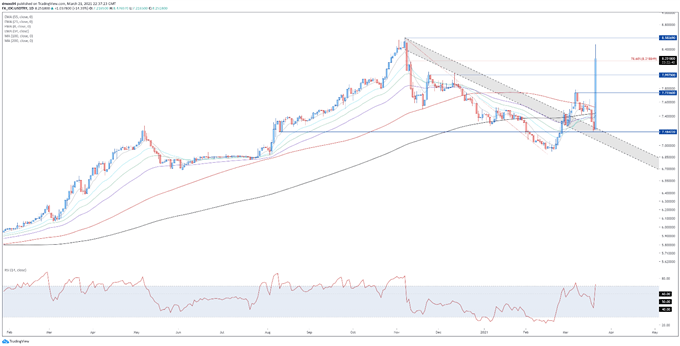 From a technical perspective, the USD/TRY exchange rate looks set to break to fresh record highs, as price storms away from downtrend resistance-turned-support and slices easily through a multitude of key resistance levels.

Ultimately, the path forward for USD/TRY depends on where price closes on the day. A daily close above the 78.6% Fibonacci (8.2188) is likely needed to carve a path for prices to challenge the all-time high registered in November 2020 (8.5827).

However, failing to hurdle Fibonacci resistance could see price consolidate above the December 2020 high (8.0269), or even fall back to probe former resistance-turned-support at the March 8 open (7.7336).