A soft start to the week for the FTSE 100 as a plunge in the Turkish Lira weighs on sentiment, while a likely extension of lockdown measures across Germany has also not helped matters. Elsewhere, a vaccine trade war appears to be breaking out between the EU and UK, with the EU reportedly looking at blocking AstraZeneca’s vaccine and ingredient exports to the UK, whereby 20% of supplies could be hit, delaying the UK’s Covid vaccine drive by 2-months.

Taking a closer look at the FTSE 100, the index has faltered at the psychological 6800 level, which in turn puts support in focus at 6624 (61.8% Fibonacci retracement). That said, the index appears to be coiling for a breakout as trendline support from December keeps the uptrend intact. As it stands, the two areas of interest are 6300 and 6900, should the index close above 6900 a move to 7000 can be expected in short order, while a break below 6300 would likely invalidate the bullish outlook for the index and thus open up a move towards 6000.

Throughout the week, tier 1 UK data will be on tap, however, following the steady BoE policy decision last week, I doubt whether the data will have a meaningful impact on the FTSE 100 and instead will focus attention on the plethora of Fed speakers, including comments from Governor Powell. Alongside this, global flash PMIs will be released, which could begin to highlight the divergence between the UK and EU with respect to relative vaccine program success. 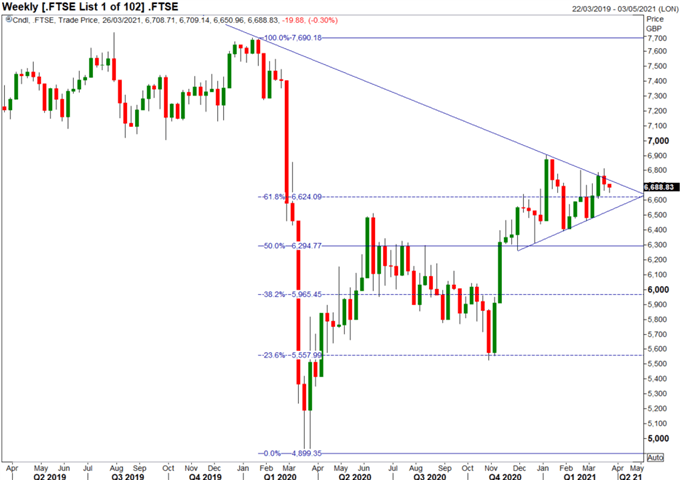 We typically take a contrarian view to crowd sentiment, and the fact traders are net-long suggests FTSE 100 prices may continue to fall.

Positioning is less net-long than yesterday but more net-long from last week. The combination of current sentiment and recent changes gives us a further mixed FTSE 100 trading bias. 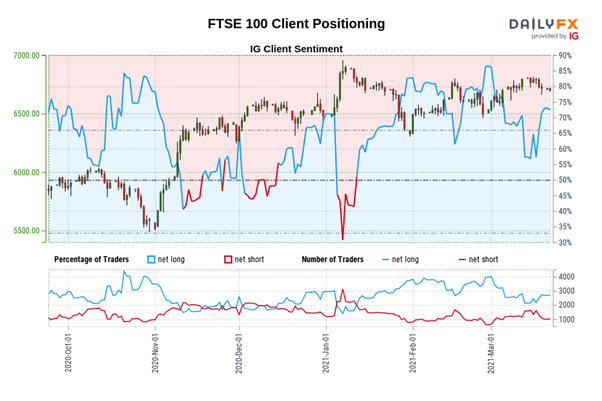