CAC 40, Euro Stoxx 50 Step Back From One Year Highs

CAC 40, Euro Stoxx 50 Step Back From One Year Highs

The CAC 40 and the Euro Stoxx 50 have both pulled back from fresh one-year highs set last week amidst fears of a third wave of Covid in Europe, slow vaccine rollouts, and a reinstatement of some lockdown measures.

Like other indexes around the world, the CAC 40 fell sharply in March of 2020 as the pandemic shocked financial markets. The index bottomed around 3,700 before rebounding higher. After consolidating around 5,000 from June to October, the index rallied in November and has since grinded higher.

The CAC 40 hit a one-year high around 6,073 on March 18th, just shy of the multi-year high hit around 6,100 just before the pandemic struck in late February. After reaching this high, the index slipped back downwards, falling back below the 6,000 level for the first time since March 10th. The index now trades around 5,975, a one-week low. 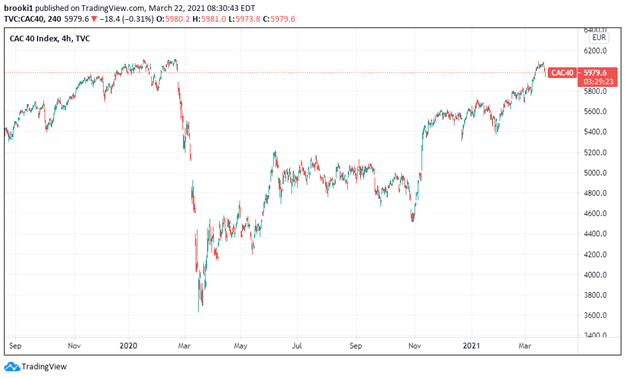 New lockdown restrictions came into effect in France on Friday night, effective in the Paris, Nice, and Northern France regions. These restrictions are lighter than earlier lockdowns. While non-essential shops must close, schools will remain open. The measures are set to last for at least four weeks.

The EU’s slow vaccine rollout amidst a resurgence in cases has made new containment measures necessary. France has fully vaccinated around 2 million people, compared to the 40 million now fully vaccinated in the US. Recent controversy over the AstraZeneca vaccine further slowed the vaccination rollout in Europe.

Last week the Euro Stoxx 50, Europe’s leading blue-chip index, rose to trade just above the pre-pandemic high of 3,864, reaching its highest point since 2008. After dropping by over 30% last March at the start of the pandemic, the index has worked its way back higher. However, since hitting a multi-year high last week, the index has turned slightly back downward. It now trades just shy of the 3,840 level at a one week low. 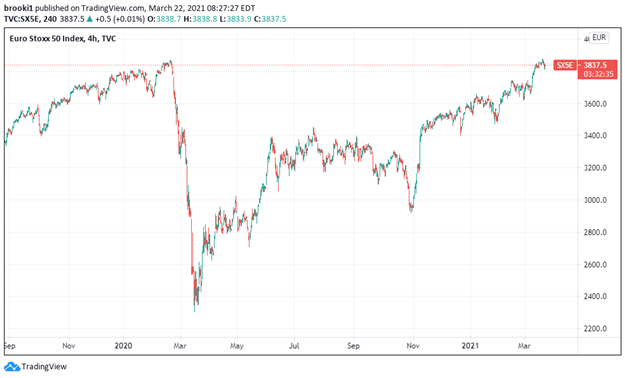 Like the CAC 40, the Euro Stoxx 50 has suffered from a slight pullback from risk assets as virus cases rise again in Europe. Germany is expected to tighten lockdown restrictions soon as cases rise past thresholds designated as worrisome to the German government. Economic data also remains weak in Europe as the bloc struggles to deal with the virus.

Another major market theme in Europe is the rise in government bond yields. Like with US Treasury yields, the yields on Eurozone government bonds have risen notably in recent months. While commentary from Federal Reserve officials welcomes the move in the US, European central bankers are not so comfortable with such moves.

At the ECB’s March policy meeting, the central bank announced plans to increase the pace of bond purchase under its QE program in an attempt to keep rates low. Other ECB members have tried to talk down yields or have hinted at capping yields through a Yield Curve Control program. While the full course of action remains to be seen, it is clear that many at the ECB view a continued rise in yields as threatening to the economic recovery.