Crude oil prices were little changed during Wednesday’s APAC session as traders await fresh catalysts from the upcoming FOMC meeting. The American Petroleum Institute (API) reported a surprise draw in crude inventories of 1.05 million barrels for the week ending March 12th, compared to a baseline forecast of a 2.7-million-barrel build. This suggests that demand is picking up at a faster-than-expected pace as refineries resume operating after February’s cold blast.

Previously, data released by the Energy Information Administration (EIA) pointed to a large inventory build over the prior two weeks as extreme weather dented refinery capacity. The EIA will release the latest weekly data today, in which markets foresee a 2.7-million-barrel increase in stockpiles after a 13.80-million-barrel risepreviously. 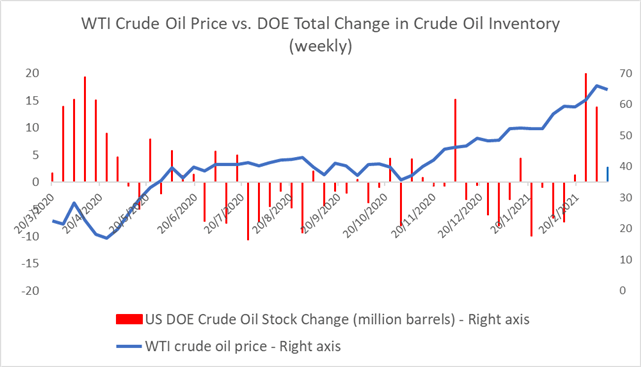 While falling stockpiles may be perceived to underpin oil prices, traders were largely staying on the sideline waiting for the Federal Reserve to paint a clearer picture of economic and monetary policy outlook later today. The US Dollar index (DXY) edged higher for a fourth day, reflecting a cautious note from investors as fears of a ‘taper tantrum’ escalated recently. Although many expect the Fed to keep the policy rate and asset purchasing program unchanged for the time being, a clear improvement in job market conditions and the economic outlook may lead to changes in the dot plot to reflect a faster pace of recovery.

The US Dollar and crude oil prices have tended to exhibit a negative relationship, with their past 12-month correlation coefficient standing at -0.818 (chart below). Should the Fed deliver a hawkish-biased message and boost the US Dollar, oil prices will probably see a deeper pullback. 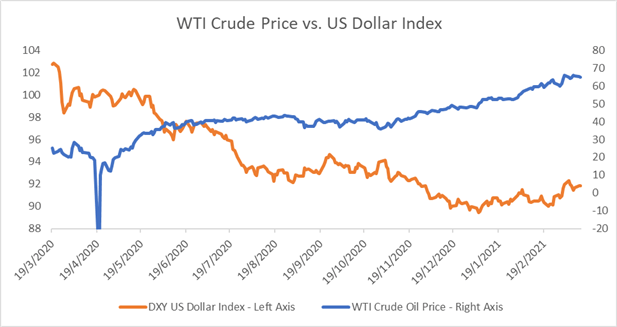 WTI has surged more than 80% from early November, backed by reflation hopes, stimulus efforts and a prompt rollout of vaccines around the globe. Restraint by OPEC+ and its allies in production hikes has further strengthened the oil price outlook alongside demand optimism. A magnificent 4-month rally, however, renders oil prices susceptible to technical pullbacks as the bullish drivers appear to have been baked-in already.

Technically, WTI retreated from the 200% Fibonacci extension level of 66.50 and entered a minor correction. The overall trend remains bullish and is well-supported by the 20-day Simple Moving Average (SMA) line. A daily close below the 20-day SMA (63.06) would likely intensify near-term selling pressure and carve a path for price to test a key support level at 62.19 (the 161.8% Fibonacci extension). The MACD indicator is diverging from prices movements, pointing to a weakening upward momentum. 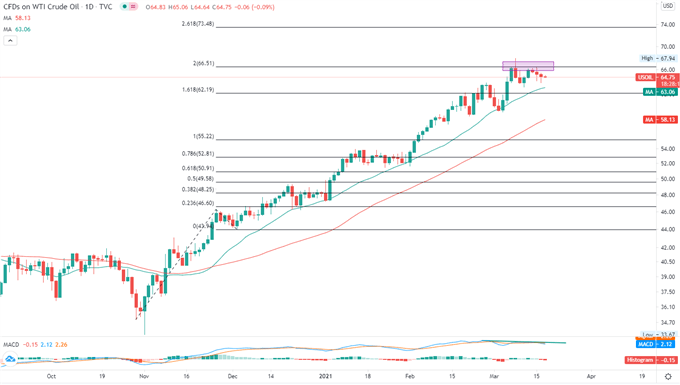