US MoM Retail Sales for the month of February printed at -3.0%, their sharpest contraction since April of 2020 and a disappointment compared to the already weak forecast of -0.5%. Core Retail Sales (ex Autos) printed at -2.7% versus a forecast of only -0.1%. However, the already strong print in January’s retail sales was revised upward, from 5.3% to 8.3%.

While February’s retail sales miss may seem concerning, a number of factors were likely at play. Poor weather across the country in February could have had a negative impact on consumer spending. Consumers also ran down their stimulus payments in January, prompting the strong print for that month. It can be reasonably expected that the metric will boom again in March as the third round of stimulus checks hit consumer accounts. 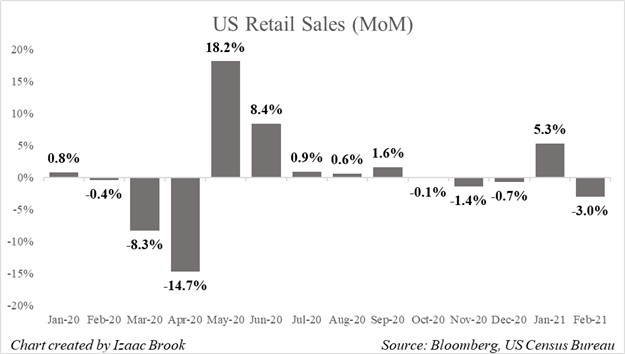 Retail sales figures serve as an important proxy for GDP data as consumer spending accounts for around 2/3rds of US GDP. Retail Sales collapsed in March and April 2020 as lockdowns were instituted before strongly rebounding in May and June as businesses reopened and consumers spent stimulus checks and other built-up savings. As cases began to climb again in the fall, retail sales posted three consecutive months of small contractions. January’s 5.3% print marked the first rise in retail sales since September 2020, but February’s print marks another contraction in the metric.

While February’s decline in retail sales could be seen as worrying to the overall economic recovery, the contraction is a transitory one and a rebound is highly likely in March. The Biden administration’s stimulus bill was signed into law in early March, and the variety of support measures offered in the bill will provide a strong tailwind to the economy, supporting it until vaccination efforts are completed and activity can return to some level of normalcy. Vaccination rollouts continue strongly, with the US just recently passing the milestone of 100 million doses administered. While daily cases have seemed to plateau in recent weeks, vaccinations continue to rise. 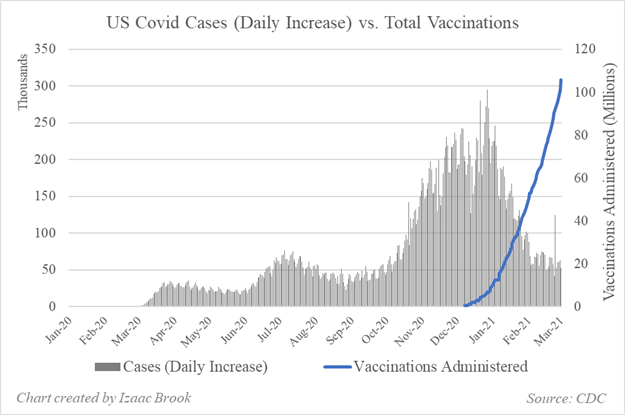 After hitting a nearly three year low in early 2021, the US Dollar has resurged as longer-term Treasury yields have moved higher. After weakening into late February, the DXY rebounded back above the 90.00 level and has remained there since amidst volatility in the Treasury market. The DXY has remained strong above the 91.00 level but has stepped back from the multi-month highs hit around 92.50 in early March.

10yr Treasury yields hit a fresh pandemic high early Monday morning around the 1.64% level before falling lower on Tuesday morning, trading just below 1.60% ahead of the print. The DXY also slipped to its lowest level of the week ahead of the print, falling from an early morning high around 91.95 to trade near 91.70. 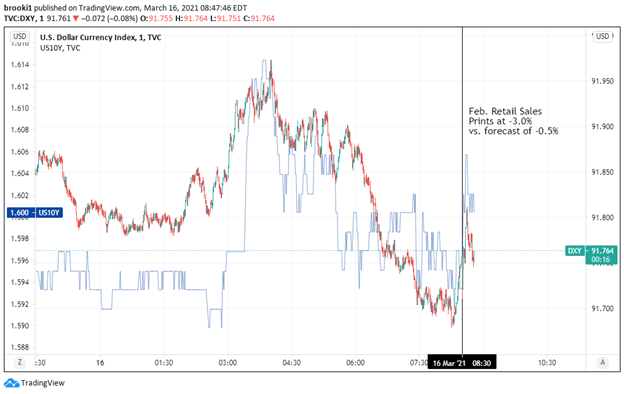 Both the DXY and 10yr Treasury yields rebounded in the immediate aftermath of the print, moving higher. The DXY had already begun a rebound off of the morning low around 91.70 and rose to trade back around 91.80 immediately following the print. US 10yr yields also rebounded, climbing back above the 1.60% level. While the DXY then dropped back towards the 91.76 level, 10yr yields have held around 1.60%.

Markets have been relatively quiet early this week, with the key risk focus being on central bank policy meetings. The FOMC meets on Wednesday March 17th. Later in the week, both the BoE and the BoJ also have policy meetings.

With the stimulus bill passed, a strong vaccination rollout, and an economic recovery already underway, some market participants are expecting adjustments to the Fed’s outlook and policy. Any adjustments could quickly drive a shift in overall risk sentiment.