Bitcoin Outlook: BTC Poised to Break to Fresh Highs or Is a Reversal Afoot?

As predicted in previous reports, Bitcoin’s dive lower from its February high proved to be nothing more than a counter-trend correction, as the popular digital currency recovers lost ground and eyes a push to fresh record highs. However, several bearish technical signals suggest that BTC could reverse lower in the coming days, despite its fundamental outlook remaining fairly positive. Here are the key levels to watch for BTC/USD. 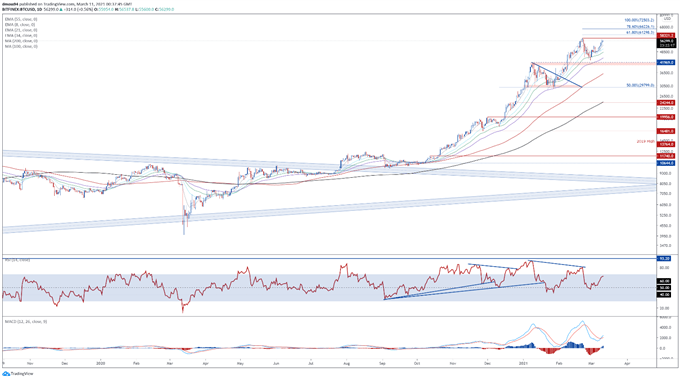 BTC/USD appears to be eyeing a push to fresh record highs, as buyers key in on the current all-time high set on February 21 (58321).

However, significant bearish RSI divergence hints at fading bullish momentum and may ultimately trigger a short-term reversal lower, if buyers fail to hurdle the yearly high.

That being said, a significant amount of divergence has been displayed since the start of 2021, with the price of BTC climbing as much as 101%.

Nevertheless, if psychological resistance at 60,000 holds firm, a correction back towards the monthly low (46417) could be on the cards. 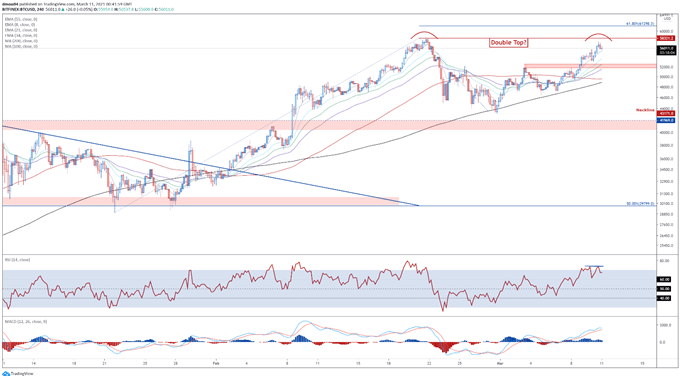 Zooming into the 4-hour chart reinforces the slightly bearish outlook depicted on the daily timeframe, as price carves out a possible Double Top reversal pattern.

Bearish RSI divergence, in tandem with a potential bearish crossover on the MACD indicator, suggests that the path of least resistance may be lower.

Sliding back below the 8-EMA (55369) would probably intensify near-term selling pressure and generate a pullback towards range support at 51800 – 52500. Breaching that brings the sentiment-defining 200-MA (48864) into the crosshairs.

Ultimately, a convincing break above the February high (58321) is needed to open the door for price to challenge the landmark 60,000 mark. 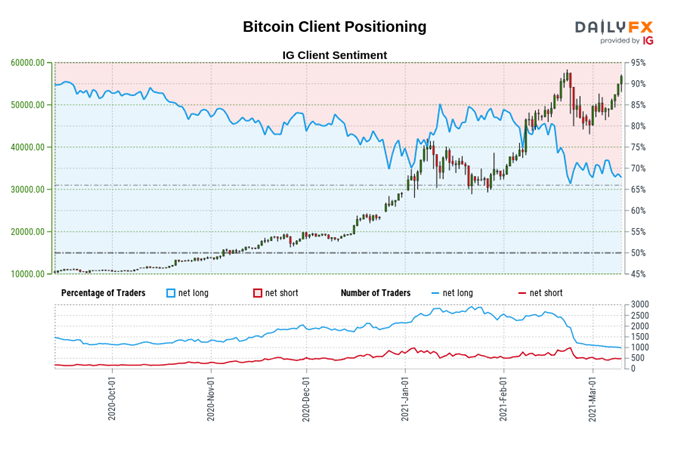