Wall Street equities had another mixed session as reflation hopes inspired investors to rotate out from growth and into value names. The Dow Jones index finished up 0.97%, while the Nasdaq 100 index tumbled 2.92%. The technology sector continued to underperform cyclically-sensitive ones such as energy, financials and consumer discretionary. Rising yields further weighed on the tech sector, which tends to offer lower dividend yields and thus are more susceptible to profit-taking activity.

Prospects for reopening also encouraged market participants to liquidate the white-hot tech stocks, which have largely outperformed during the pandemic. Heavy losses were seen among the Nasdaq 100 index components overnight, with NVIDIA (-6.97%), Tesla (-5.84%) and PayPal (-5.42%) among the worst performers.

Breakthrough on the US stimulus packaged failed to lift market sentiment on Monday, as Asia-Pacific markets retreated broadly amid rising longer-term Treasury yields and a resurgence in the US Dollar. The DXY US Dollar index climbed to a fresh three month high of 92.37, driven by safe-haven bid as well as hopes for a faster pace of economic recovery in the US with fresh stimulus payouts. The 10-year Treasury yield climbed 2.13% to a fresh 12-month high of 1.599%. Against the backdrop of a stimulus-backed reflationary theme and the Fed’s reluctance to address rising longer-term borrowing costs, yields may continue to nudge higher, exerting downward pressure on tech stocks, precious metals and crude oil prices.

Crude oil prices retreated from a 12-month high after the knee-jerk reaction following the attack on Saudi Arabia’s oil facility faded quickly. Gold prices extended losses to a fresh 9-month low of US$ 1,683 amid a rising US Dollar and yields. 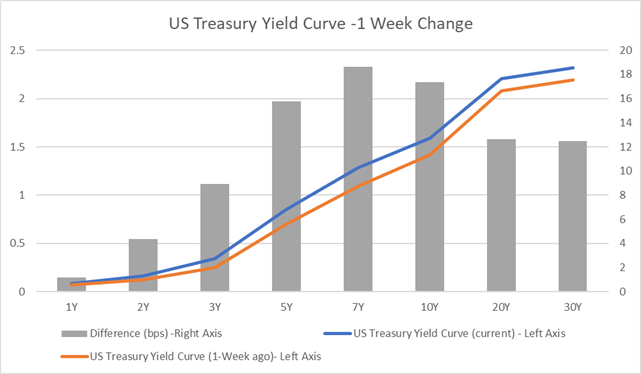 Looking back to Monday’s close, 8 out of 9 Dow Jones sectors ended higher, with 83.3% of the index’s constituents closing in the green. Communication services (+5.17%), financials (+1.95%) and consumer discretionary (+1.42%) were among the best performers, while information technology (-0.51%) was a clear drag. 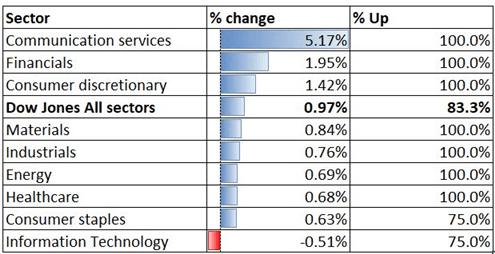 The Dow Jones indexextended higher within the “Ascending Channel” formed since early November 2020. An immediate resistance level found at 31,916 (the 76.4% Fibonacci extension, breaking it would probably intensify near-term buying pressure and bring the 100% Fibonacci extension level (32,863) into focus. The overall trend remains bullish-biased as suggested by the upward-sloped moving averages. The MACD indicator has formed a bullish crossover, suggesting that near-term momentum has turned.

The Nikkei 225 index failed to breach the 161.8% Fibonacci extension level (30,455) and has since entered a technical correction. An immediate support level can be found at around 28,534, where the 50-day SMA and the 100% Fibonacci extension intercept. A daily close below this level would probably intensify near-term selling pressure and bring the next key support level of 27,870 into focus. The MACD indicator trended lower after the formation of a bearish crossover, suggesting that near-term momentum is tilted to the downside. 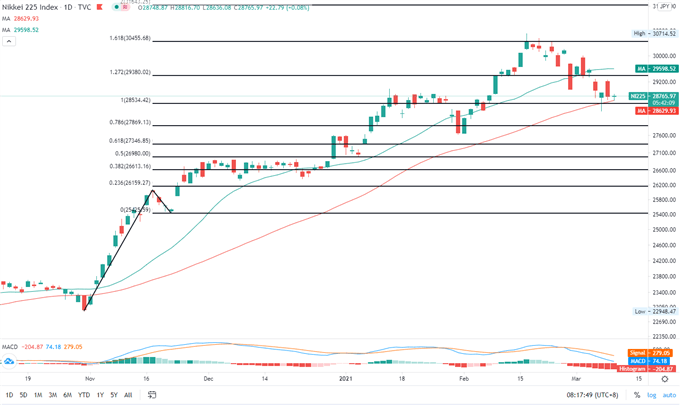 The ASX 200 index failed to breach the 200% Fibonacci extension level (6,934) and has since entered a technical correction. A key support level can be found at 6,730 – the 161.8% Fibonacci extension. Prices appear to be consolidating within the “Ascending Channel”, the ceiling and floor of which may serve as immediate support and resistance levels respectively. The MACD indicator is trending lower towards the neutral midpoint, suggesting that near-term momentum remains weak.