Economic data for the month of January printed broadly in-line or near its forecasts. YoY PCE numbers printed at 1.5%, remaining short of the Fed’s 2% target and putting the predictions of sharply higher inflation that have emanated throughout markets in recent weeks on hold. MoM PCE was slightly weaker than expected, printing at 0.3% vs. the 0.4% forecast.

Strong numbers in MoM Personal Income and Personal Spending were expected. As a result of the second stimulus bill passed at the end of 2020, personal incomes rose by 10% (9.5% expected) in January. The influx of government-sponsored cash drove the Personal Savings rate to 20.5% from its previous level of 13.4%. In a continuation of the extremely strong January retail sales print, personal spending rose by 2.4%, a strong rise compared to December’s -0.2% but slightly below the 2.5% forecast.

The accuracy of the forecasts regarding those prints suggests the economic recovery is continuing along as expected. January durable goods orders printed strongly above forecast and jobless claims numbers improved week-over-week. The House of Representatives plans to pass the Biden administration’s stimulus bill today, sending it on to the Senate. Congress hopes to have the bill signed into law by mid-March.

Powell’s two day Congressional testimony was about as dovish as could be, with the Fed chair reiterating his pledge to keep monetary policy accommodative until real and substantial progress is seen in both the labor market and inflation.

The key market theme of the past week has been the rise in US Treasury yields. Yields at the longer-end of the curve pushed steadily higher this week, sparking portfolio rebalancing and general volatility across markets.

The relationship between the US Dollar and US yield seemed to be breaking down this week as the DXY grinded lower despite higher yields. However, yesterday’s market turmoil brought this relationship back into balance. As multiple market themes coalesced into one, the US Dollar resurged. 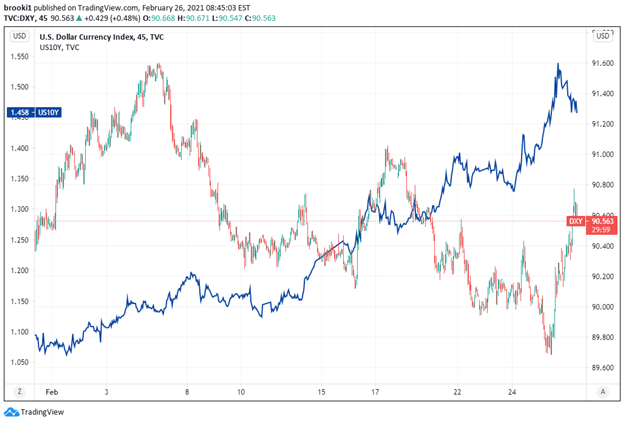 After falling to a nearly two month low below the 90.00 level early yesterday, the DXY rebounded as yields ripped higher and equities sold off. The DXY fell slightly following the prints but continues to trade around a weekly high. US Indices futures have pared their losses as they attempt to recover from yesterday’s selloff, with S&P 500 and Nasdaq futures now solidly in positive territory.