Fresh cyclical lows for USD/CAD having broken through the YTD low at 1.2586 with the move seeing a strong follow through as the USD breaks below the psychological 90.00 handle. The reflation theme has been at play for some time now with oil prices ripping higher and arguably the Canadian Dollar had largely lagged the move seen in other high beta currencies such as the AUD and NZD. As such, the CAD looks to have played a bit of catch up with a sizeable drop in USD/CAD over the last 24-48hrs. Reminder, tomorrow is month-end rebalancing where investment bank models have touted USD selling, in light of outperformance in US equities. With that in mind, USD/CAD has room for further losses through to Friday. Levels of note on the downside is at 1.2442 and 1.24.

However, what I would point out is that on the technical front, USD/CAD looks to be putting in a bullish divergence on the RSI, typically suggesting that a bounce back is possible. This is also a similar pattern that played out back in September, where a 3% gain in the pair followed, which in today’s market would put USD/CAD back to 1.28. That said, I would wait until after the London Fix tomorrow before a possible mean reversion comes into play, at the same time, the oil market has been a key driver for the Loonie. As such, confidence of a possible bounce back in USD/CAD would grow, should oil prices begin to rollover ahead of the OPEC meeting. 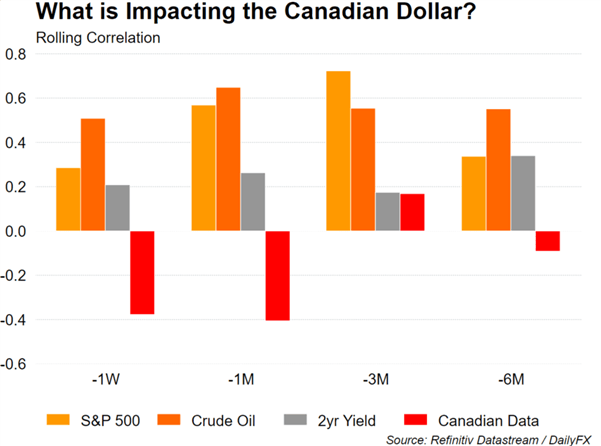 Much like CAD, the same can be said for the Australian Dollar, which has also has tracked the reflation narrative. Base metals have rallied, copper forecasts are calling for record highs given expected supply deficits, which has increased the attractiveness of the Aussie. Alongside this, with the US fiscal impulse on the horizon, there is little to dislike about AUD, particularly against funding currencies (JPY and CHF). Earlier today, AUD/USD briefly hit 0.80 for the first time 3 years and should AUD/USD close above the psychological level, there is little in the way until the double top at 0.8125-35. That said, once again on the technical front, momentum in the short run looks to be somewhat excessive with the RSI at its highest level since early March. In turn, the view is for bids on dips for the pair as equity prices are likely to continue with its upward trajectory.