The Reserve Bank of New Zealand kept its Official Cash Rate (OCR) steady at 0.25% in its first interest rate decision of the year, as expected. However, some were anticipating the RBNZ to shift to a more hawkish stance after a solid few months of rising home prices and inflation data. New Zealand’s economic strength in recent months is largely due to the country’s ability to contain the virus pandemic within its own borders.

While the consensus held around changes to the OCR is that it would be premature to raise rates, some expected a pullback in the size of large scale asset purchases (LSAPs), but it appears the central bank is holding off on doing so for the time being and will keep the size of buying at NZ$100 billion, with a June 2022 target end date. A pullback in quantitative easing will most likely still precede any change to the OCR, but Kiwi gains – which have seen an influx of strength recently-- is one factor challenging the RBNZ’s hand in doing so. Still, the bank noted that it is prepared to provide additional stimulus, if necessary.

That said, the New Zealand Dollar is tracking higher following the interest rate decision. Any follow-through is likely to come after commentary from RBNZ Governor Adrian Orr, who is set to deliver remarks shortly. If markets perceive a more hawkish tilt from Mr. Orr—which may come by the way of talk over tapering the LSAPs—Kiwi strength may accelerate. The policy statement did note that the preparations to take rates negative, if necessary, are now complete but the economy has seen strong activity since those plans were put into place and the market does not appear to be expecting rates to go negative.

The ongoing Covid-19 pandemic is the largest question mark to the economic outlook and while New Zealand is managing better than most, travel restrictions and other virus-induced measures continue to affect the economic recovery. Effective international vaccine distribution and other controls to manage the pandemic will play a major role in the pace and depth of the global recovery. Still, the projections set appear to account for a more rosy outlook, although remaining on the modest side.

The updated economic projections along with the still dovish monetary policy stance may put some short-term pressure on the New Zealand Dollar, but overall the global reflation theme bodes well for the Kiwi’s mid- to long-term outlook. On net, inflation and the labor market need to see improvements for the RBNZ to begin tightening policy and downside risks should be carefully monitored. 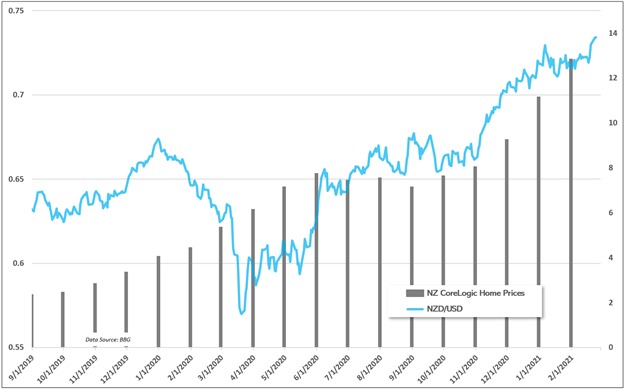 The New Zealand Dollar is tracking higher against the US Dollar following today’s interest rate announcement. NZD/USD is on track to hit the psychologically important 0.7400 level after rising through 0.7350 in the immediate rate announcement aftermath. The Relative Strength Index and MACD oscillators look primed to see NZD push higher against the Greenback and the pair is still enjoying some bullish energy following a breakout from a Descending Triangle pattern. 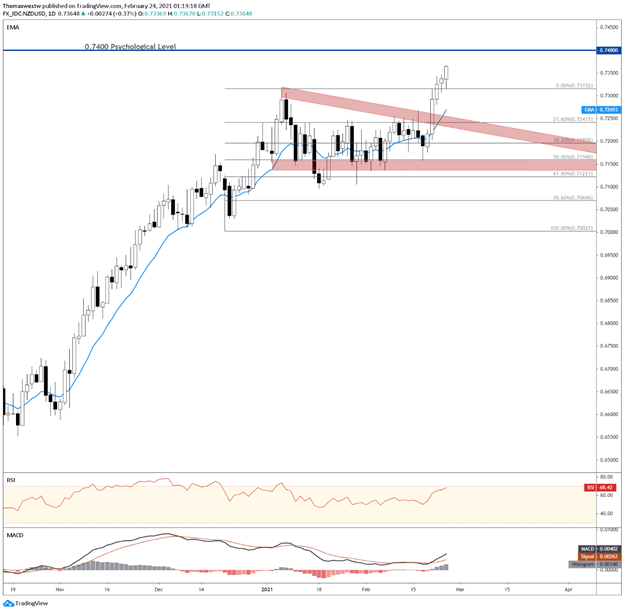