US indices have extended on losses with the S&P 500 finally posting a convincing break below the area of support I had mentioned last week (3880-3900), while there was enough follow through to take the index below the 20DMA. Reminder, equity markets are also going through a seasonally weak period and thus much of this downside appears to be a short-term tactical play. Keep in mind, that another US fiscal stimulus package is in the works with the House Budget Committee yesterday advancing the $1.9trillion aid bill as expected with a House vote due later week. As such, the short-term weakness at play is unlikely to alter the longer-term trajectory in US equities. 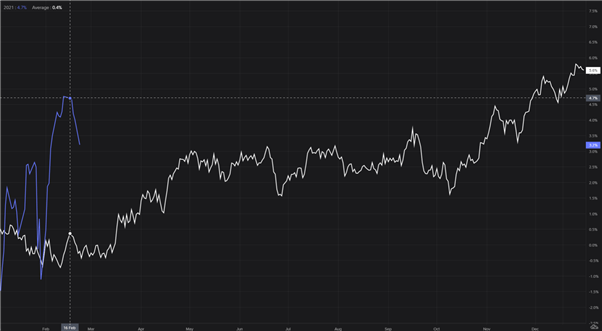 What Will Powell Say About the Bond Market?

In light of the substantial rise in global yields, the bond market has become an increasing focal point for market participants in recent weeks. Comments made by ECB President Lagarde yesterday that the central bank is closely monitoring the evolution of longer-term nominal bond yields has increased focus on Powell’s testimony (due 1500GMT) as to whether the Fed Chair will echo Lagarde’s comments. Should this be the case, this may be enough calm the bond market, allowing for risk sentiment to stabilise, placing pressure on the USD, particularly against the Japanese Yen, which has followed US fixed income closely. Another scenario would be that the Fed Chair signals that a WAM extension is a possibility to address the bond market, and while this will likely result in a sizeable market reaction, this is very unlikely to be mentioned by Powell, particularly as Fed Officials continue to highlight the move in fixed income has been due to the expected fiscal impulse, alongside optimism over vaccine rollouts.

US Yield Curve Today vs Day of Jan FOMC Meeting 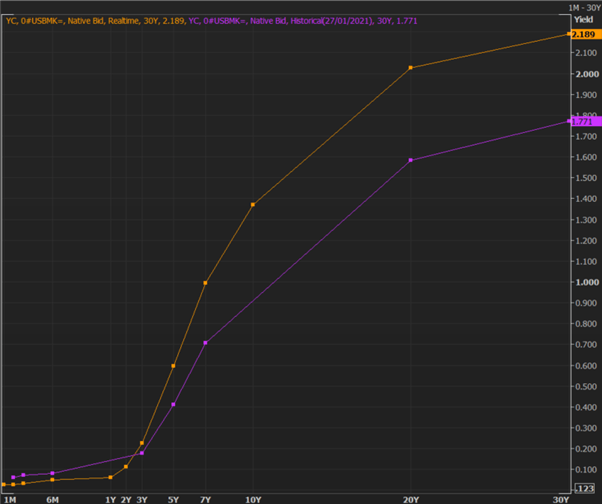