The Reserve Bank of New Zealand’s upcoming interest rate decision on February 24 will likely dictate the near-term trajectory of the local currency, with the central bank expected to retain its dovish tone despite a faster-than-expected recovery in local economic output.

Indeed, the nation’s jobless rate plunged in the fourth quarter, while consumer price growth has accelerated rapidly towards the central bank’s target mid-point of 2%. The unemployment rate fell to 4.9% (est. 5.6%) in the final three months of 2020, and inflation rate climbed to 1.4% (est. 1%).

These positive developments diminish the need for additional monetary stimulus from the RBNZ. However, the recent dovish moves from the Reserve Bank of Australia suggests that its trans-Tasman counterpart may also surprise market participants at its upcoming meeting. The RBA opted to extend its bond-buying program to keep a lid on the Australian Dollar at its February 2 meeting.

That being said, with the central bank worried about “the risk a sharp correction in the housing market poses for financial stability”, the provision of additional stimulus seems relatively unlikely. Therefore, the New Zealand Dollar looks set to extend its recent climb against its haven-associated counterparts, should the RBNZ exhibit a more upbeat tone on the island nation’s economic outlook. 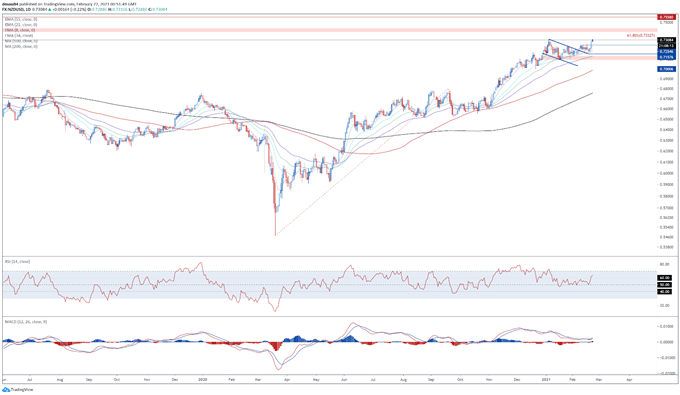 The New Zealand Dollar has surged higher against the Greenback in recent days, after validating the topside break of a counter-trend Descending Channel and bursting above key resistance at the February 9 high (0.7255).

With the RSI jumping to its highest levels since early-January, and the MACD tracking firmly above its neutral midpoint, the path of least resistance seems higher.

However, if Fibonacci resistance remains intact, a short-term pullback towards the 8-EMA (0.7247) could be on the cards. 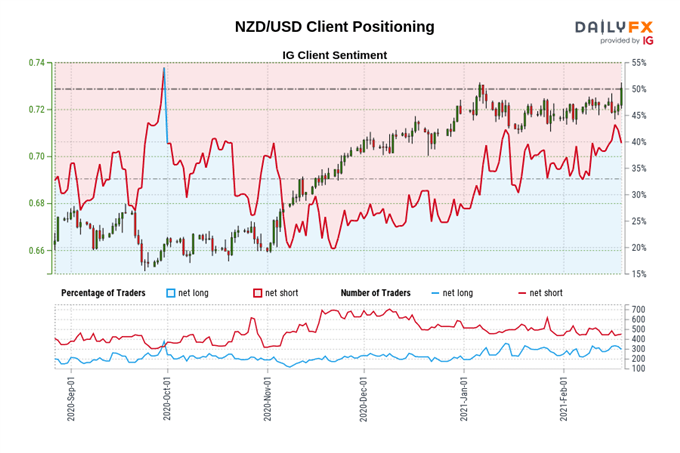 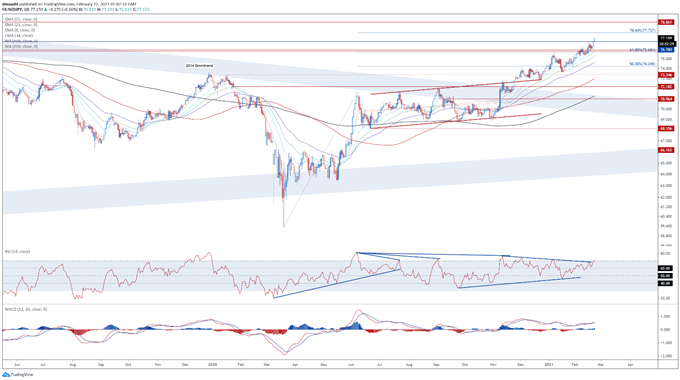 The NZD/JPY exchange rate also seems poised to continue climbing higher in the coming weeks, as price surges above psychological resistance at the 77.00 handle.

Bullish moving average stacking, in tandem with the RSI diving back into overbought territory, suggests that further gains are in the offing.

Alternatively, dipping back below the February 16 high (76.72) could neutralize near-term buying pressure and trigger a downside push back to range support at 75.75 – 75.95.