USD/MXN Bounces as Bank of Mexico Elects to Cut Rates by 0.25%

The Bank of Mexico unanimously decided to cut interest rates by 25 bps to 4.00% after meeting on Thursday. The decision was in line with expectations, as a cut of 25 bps was foreseen as extremely likely given recent economic weakness in Mexico. The rate cut comes as the Mexican economy experienced its worst year since the Great Depression, with economic activity declining by 8% as a result of the pandemic. 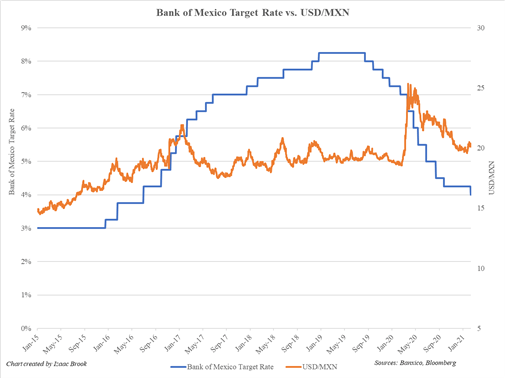 The Bank of Mexico embarked on an easing cycle beginning in August 2019, cutting rates so that they stood at 7.00% as of February 2020, down from a peak of 8.25% a year earlier. The onset of the pandemic and its economic impact drove the Bank of Mexico to take further aggressive action, with rate cuts of 50bps each in March, May, June, and August. A final cut of 25bps was made at the September meeting. During the November and December meetings, the Governing Board held the key rate steady at 4.25%. Today’s rate cut represents a change in course, as monetary policy now seeks to jumpstart a “slacking” economy.

The appointment of the more-dovish Galia Borja as a Deputy Governor in January has tilted the balance of the Governing Board towards a more dovish majority. Borja replaced Javier Guzman, who had voted to hold rates steady at the November and December meetings.

However, comments from Deputy Governor Jonathan Heath made in early February had suggested that any further rate cuts would be held off until April as bank officials wait to see how inflation moves.

Today’s decision comes shortly after a slightly higher than expected CPI print for January 2021, although the numbers remained within the central bank’s target of 3.0% +/- 1 percentage point.The Governing Board is looking to strike a balance between further easing and inflationary pressures. The Mexican economy is heavily dependent on the US economy, so progress towards the Biden administration’s stimulus bill could provide a further tailwind to growth. 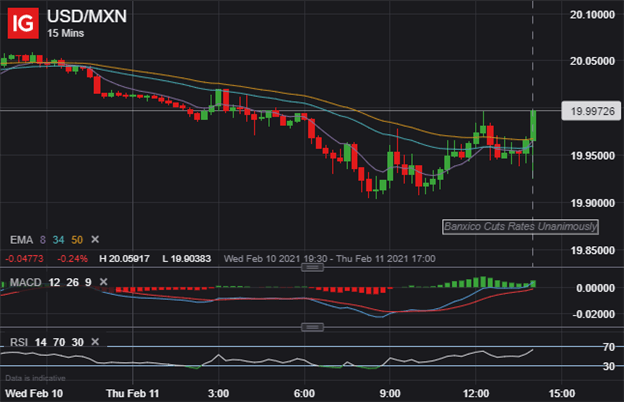 After rising to historic highs above the 24.00 level during March 2020’s market volatility, USD/MXN declined up until mid-November. Since then, the pair has consolidated along the 20.00 level. The pair continues to be rangebound between 19.50 and 20.60. Recent dollar strength has seen USD/MXN retreat from its 3-month highs.