Bitcoin (BTC/USD) is back in the press again after two of the world’s largest companies said that they are looking closely at the cryptocurrency as a means of payment. In a press release, Mastercard’s Raj Dhamodharan wrote that digital assets are becoming a more important part of the payments world.

‘We are seeing this fact play out on the Mastercard network, with people using cards to buy crypto assets, especially during Bitcoin's recent surge in value. We are also seeing users increasingly take advantage of crypto cards to access these assets and convert them to traditional currencies for spending….We are preparing right now for the future of crypto and payments, announcing that this year Mastercard will start supporting select cryptocurrencies directly on our network. This is a big change that will require a lot of work. We will be very thoughtful about which assets we support based on our principles for digital currencies, which focus on consumer protections and compliance.’

In addition to Mastercard’s seal of approval, Twitter’s finance chief Ned Segal told CNBC yesterday that they had been doing a lot of thinking about paying employees and suppliers in Bitcoin, following in the steps of Tesla at the start of the week. According to Segal, "One of the key things we'd look at would be if people were asking to transact with us in Bitcoin, because then we might consider whether we would be transferring dollars to Bitcoin at the time of the transaction, or if we wanted Bitcoin on our balance sheet, ready to complete that transaction.”

Bitcoin jumped sharply higher at the start of the week after Tesla CEO Elon Musk announced, via an SEC filing, that the company had bought $1.5 billion worth of the cryptocurrency and expect to begin accepting Bitcoin as a ‘form of payment for our products in the near-future.’

After hitting just over $48,000 post-Tesla release, Bitcoin has slipped back to, and is currently consolidating around, the $45,000 level, as a raft of alt-coins climb higher. While the technical outlook for Bitcoin remains neutral in the short-term, the fundamental backdrop is looking a lot more positive as further Bitcoin adoption looks likely. On the daily chart, the recent rally has been met with indecision over the last three days, although all the other signals remain positive. It is more likely than not that Bitcoin will print a new all-time high in the short- to medium-term with a ‘big figure’ target of $50,000 the first hurdle to overcome. 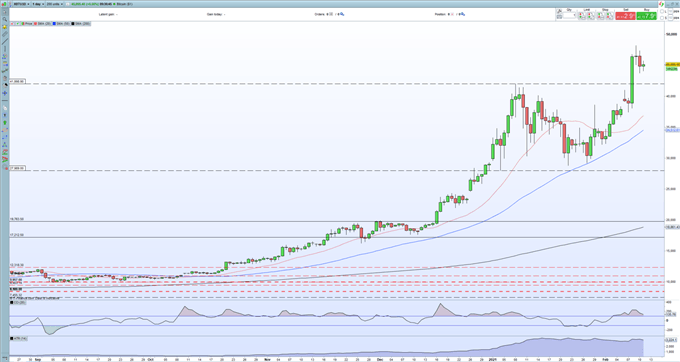 Retail trader data show 80.87% of traders are net-long with the ratio of traders long to short at 4.23 to 1. We typically take a contrarian view to crowd sentiment, and the fact traders are net-long suggests Bitcoin prices may continue to fall.Traders are further net-long than yesterday and last week, and the combination of current sentiment and recent changes gives us a stronger Bitcoin-bearish contrarian trading bias.

What are your views on Bitcoin (BTC) – bullish or bearish?? You can let us know via the form at the end of this piece or you can contact the author via Twitter @nickcawley1.