Asia-Pacific equities are poised to trade modestly higher after all three major US equity indices finished at record highs amid favorable market sentiment. The Democrats came up with an initial draft of the US$ 1.9 trillion fiscal stimulus bill, which will soon be sent to Congress for voting. The S&P 500, Dow Jones and Nasdaq 100 index climbed 0.74%, 0.76% and 0.67% respectively, with nearly three quarters of S&P 500 companies finishing in the green.

As expectations for further fiscal spending rose, the US Dollar index pulled back from recent highs to 91.00 and thus alleviated pressure over risk assets and commodities. A weaker US Dollar may also encourage capital flows into emerging markets, buoying equity and currency prices. Meanwhile, the PBOC signaled that it has no intention to tighten monetary policy in its quarterly monetary report after heightened volatility was observed in the short-term money market rates. The central bank’s neutral stance may buoy sentiment in Chinese equity markets, which have been consolidating since late January.

Crude oil prices continued to edge higher on reflation hopes and declines in Covid-19 cases around the world with the rollout of vaccines. The WTI is moving closer to the 58.00 mark – the highest level since January 2020 and well above the pre-Covid perch. Bitcoin surged above US$ 46k mark after Tesla revealed a US$ 1.5 billion investment into the cryptocurrency. The company plans to adopt Bitcoin as a form of payment for its products in the future, igniting hopes for more commercial applications and mainstream recognition of the cryptocurrency. 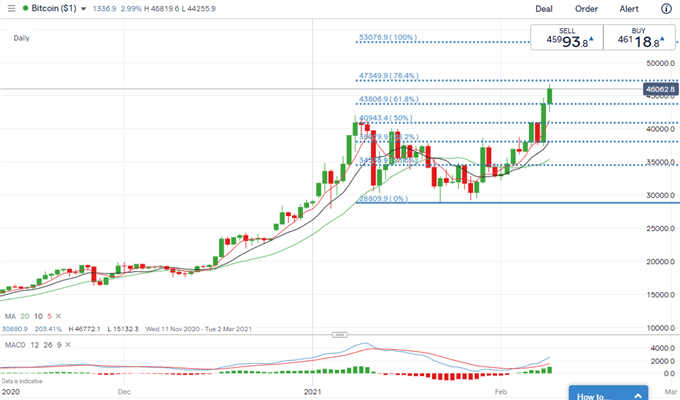 Australia’s ASX 200 index started slightly lower in early trading hours, with growth and cyclical sectors outperforming the defensive names on reflation hopes. Information technology (+0.89%), materials (+0.87%) and energy (+0.80%) were leading, whereas utilities (-1.32%) and consumer discretionary (-1.16%) were lagging. The index recently broke above a key resistance level of 6,810 after the RBA kept its interest rate unchanged and moved forward with an additional A$ 100 billion asset purchasing program in the policy meeting.

Hong Kong’s Hang Seng Index (HSI) looks set to open flat as mainland traders prepare themselves for the week-long Lunar New Year holiday break. Recently, net southbound inflow via the stock connections have declined (chart below), which may explain the index’s relative underperformance. Daily turnover in the HKEX shrank to HK$ 185 billion on Monday from HK$ 239 billion on last Friday, suggesting that the rally may take a pause amid lowered pre-holiday trading activity.The HKEX will be shut from this Friday to next Monday. 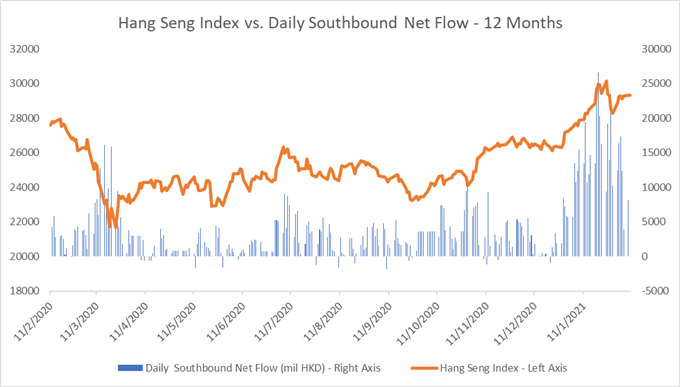 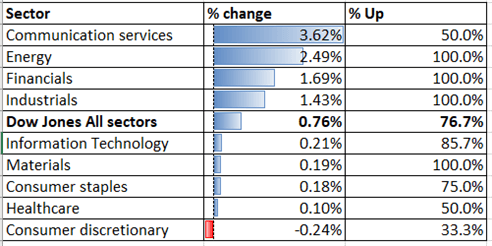 The Dow Jones quickly returned to an “Ascending Channel” after briefly diving below it in late January, suggesting that the index has resumed its upward trajectory. Price surged above its previous high of 31,288 and has likely opened the door for further upside potential. The MACD indicator has formed a bullish crossover, reflecting that the bulls are probably taking control. An immediate resistance level can be found at 31,380 (61.8% Fibonacci extension), breaking which may open the door to challenge the next major resistance at 31,970 (76.4% Fibonacci extension).

The ASX 200 index broke above a range ceiling of 6,810 (200% Fibonacci extension) and has likely opened the door for further upside potential (chart below). A widening Bollinger Band width suggests that volatility is picking up, and prices may continue nudging higher within the upper band. Immediate support levels can be found at 6,810 (previous resistance) and then 6,765 – the 20-Day SMA.

The Hang Seng Index has likely entered a period of consolidation after rebounding from end-January lows. The overall trend remains bullish-biased and supported by the upward-sloped SMA lines. But a failed attempt to break above 29,450 (neckline of the “Double Top” pattern) may risk the formation of lower highs and perhaps will lead to another correction. The MACD indicator is trending lower, suggesting that near-term momentum remains weak.