The last time I talked about the DAX was last Monday and I mentioned how I believed bullish sentiment had returned to equity markets, at which point the DAX 30 finished the day higher by 2.63% and kept the momentum going throughout the week, breaking above the all-time high this morning during the Asian session.

That said, I also mentioned that I doubted the German index had enough fundamental and technical drive to retest the all-time high, and we now know I was wrong. I do still believe that we’ll likely see a pullback before any more significant progress is made, but given how equity markets have remained in this “buy all” mentality, I could well be mistaken again.

Overall, market sentiment seems to be tilted to the upside again, as the vaccine rollout gives enough hope to think we could see an end to the virus issue soon, but not enough to encourage fiscal and monetary institutions to scale back stimulus in the economy, meaning that financial markets are well supported in the short-term.

In Germany, the new and more infectious variants of the virus are becoming an increasing worry as some European countries have faced strong outbreaks. The EU is falling behind when it comes to the rate of vaccination, given a distribution issue with the AstraZeneca vaccine, which added to the conclusion that such vaccine isn’t proven to be efficient in over 55s, is increasing concerns about the likelihood that we may not see some normalcy return this summer, which has been the glimmer of hope at the end of the tunnel up until now. 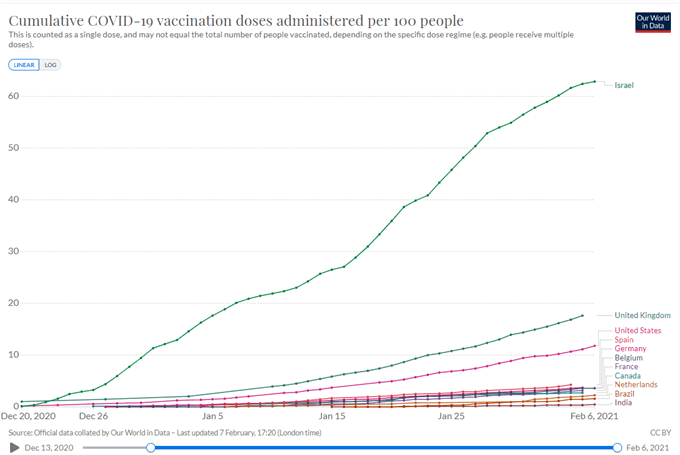 Technically, the DAX 30 shows strong signs of being overbought after last weeks rally, with the stochastic being at its highest level since the month of June last year. We’ve already seen a small bullish rejection this morning as the German index is now just above Friday’s closing price despite strong momentum taking price above 14,140 in the Asian session.

What happens today may set the mood for the rest of the week, so which side of the previous all-time high today’s candlestick closes at will be something to look out for. Further bullish momentum may see an attempt towards 14,500, although there is likely to be some strong resistance along the way. Alternatively, if price is unable to hold above 14,140 then we may start to see that much-anticipated correction towards 13,500. If so, I expect there to be some support around the 13,675 area.