Bitcoin prices surged above the $44,000 mark to fresh record highs, on the back of news that Tesla has invested $1.5 billion in the popular cryptocurrency and plans to begin accepting it as a form of payment. The California-based electric vehicle manufacturer stated that “we expect to begin accepting Bitcoin as a form of payment for our products in the near future, subject to applicable laws and initially on a limited basis”.

This should come as no surprise given Chief Executive Officer Elon Musk’s musings about BTC, commenting recently that “I think Bitcoin is really on the verge of getting broad acceptance by sort of the conventional finance people”. Musk has also previously enquired about the ability to convert large transactions of Tesla’s balance sheet into the anti-fiat asset.

Tesla’s move may provide further validation of BTC as a mainstream asset and intensify capital inflows in the near term. Moreover, the notable pickup in inflation expectations could ignite a more extended move higher, as coronavirus vaccination progress and the prospect of additional fiscal support fuels bets on a robust global economic recovery. 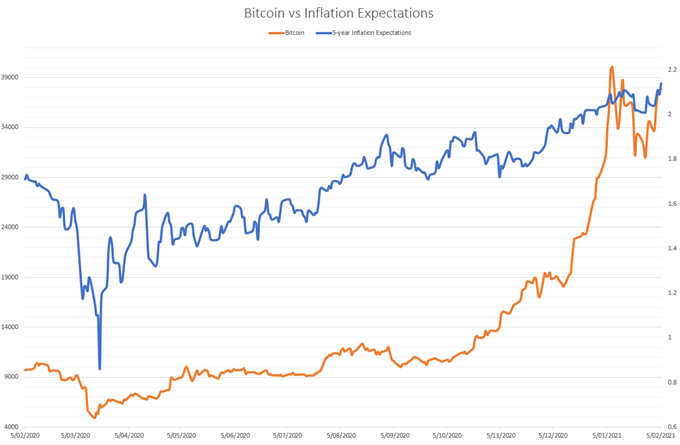 From a technical perspective, the outlook for Bitcoin continues to hint at further gains as price surges above key resistance at the 200% Fibonacci expansion (42673).

With the RSI continuing to track in overbought territory, and the slopes of all 6 moving averages notably steepening, the path of least resistance seems higher.

However, if price fails to remain constructively perched above 42,000, a short-term pullback to the 8-EMA (35226) could be in the offing. 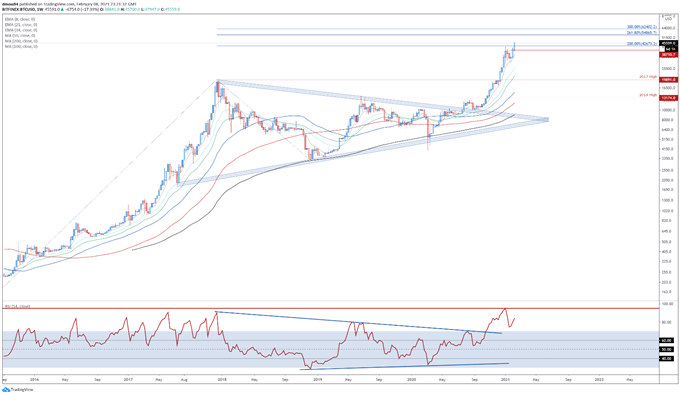 Zooming into the daily chart reinforces the bullish outlook depicted on the weekly timeframe, as price surges above 42,000 to begin probing the Descending Triangle pattern’s implied measured move (47699).

Ultimately, the continuation pattern could prove to be a Bull Pennant formation, which suggests that price could climb an additional 29% from current levels to challenge the 60,000 mark.

However, if 48,000 successfully neutralize buying pressure, a short-term pullback to former resistance-turned-support at the January high (41969) could be on the cards. 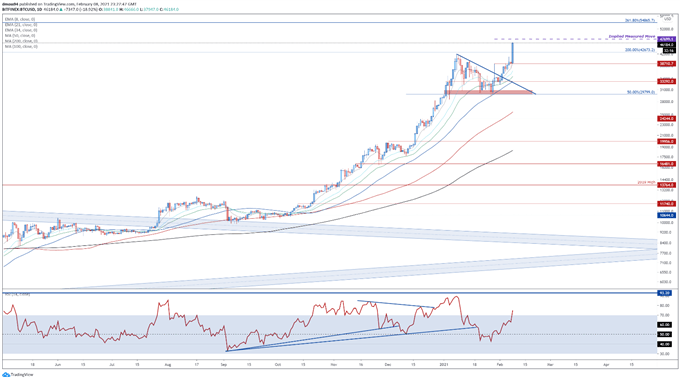 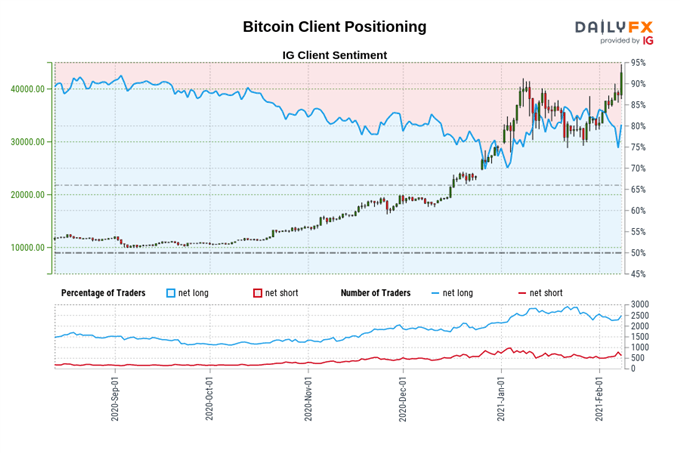