This week the Rand pulled back some lost gains to the U.S. Dollar despite Dollar strength, as the global investor search for yield outweighed the flock to the greenback. This is not unique to the Rand as this trend ran through most Emerging Market (EM) currencies. In addition, U.S. stimulus hopes once again supported the boost in EMs which has been the primary influence on the USD/ZAR pair of late. This rhetoric (risk-on/risk-off) has plagued EMs and will continue to do so until some certainty is established.

2021 has been net negative for the Rand against the Dollar (see chart below) which currently sits at 2.1%. The Rand is roughly mid-table in comparison to other EMs but an expectant global recovery could push the Rand toward December 2020 highs. 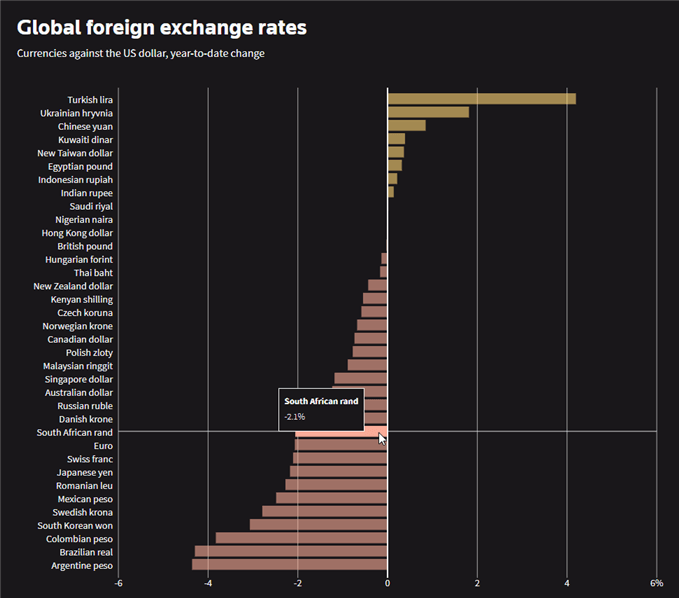 South Africa has seemingly put the peak of the second COVID-19 wave behind as new daily cases (see chart below) have been steadily declining. It will be interesting to see how this statistic unfolds after eased restrictions by President Cyril Ramaphosa earlier this week. The Rand continued to gain after the announcement which falls in line with an optimistic global sentiment. 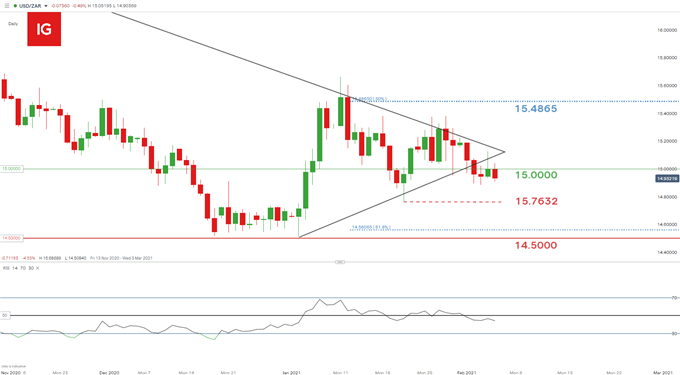 In my analysis earlier this week I eluded to the likelihood of a break below the symmetrical triangle support level which continues in the direction of the preceding trend (downward). This has now been confirmed as price action hovers around the 15.0000 psychological level. This level (previously horizontal support) now serves as resistance for USD/ZAR bulls.

From a technical standpoint and fundamental standpoint, the Rand may continue to show strength toward the January swing low at 15.7632 over the next week or two however, todays NFP data may cause short-term volatility dependent on the actual figures released whereas further USD/ZAR upside may occur if the 15.0000 is breached and confirmed.

The Relative Strength Index (RSI) has now dipped below the 50 level which suggests a bearish bias, and is supportive of the current downtrend.

NFP figures are forecasted at 50K job additions for January 2021 which is a significant increase from previous (-140K) data. This positive data is indicative of an expectant U.S. recovery as employment rates rise in the U.S. The greenback has already shown notable strength this week which is likely reflective of the estimated figure. Any disappointing release (lower than expectations) may result in a sharp move lower on USD/ZAR while a figure in line with 50K may not provide much in terms of price fluctuation.