RBA Surprises on the Dovish Side to Curb AUD Strength

The Australian Dollar is attempting to nurse its losses seen at the beginning of the week as the currency tracks risk sentiment higher. The RBA had surprised many by extending its QE program earlier than expected. It was clear that the central bank intended to place pressure on the Australian Dollar with the RBA noting that the currency is in the upper end of the range of recent years. Board members also pushed back the timing of a rate hike to 2024 at the earliest in which Governor Lowe elaborated on this by stating that they would need to see a couple of quarters of inflation above 2.25% before rates could rise. However, while the RBA reinforced its dovish stance, firm risk appetite is likely to keep the Aussie afloat for now, albeit the currency may continue to be out of favour against the AUD and CAD.

The Aussie is attempting to stabilise around the 23.6% Fibonacci retracement at 0.7624 (Nov 2020-Jan 2021 rise), which also coincides with the 50DMA (0.7618). However, with both levels yet to be closed above, AUD/USD retains a rather weak bias. As such, the weekly close will be carefully watched. Alongside this, there is also the USD side of the equation which has remained in recovery mode, the question however, is how long equity markets can stay afloat when the dollar continues its bid, my view, not very long and thus this can end up being a double negative for the AUD/USD. For now, support is situated at 0.7555-65 with resistance at 0.7620-25 and 0.7655-65 above. 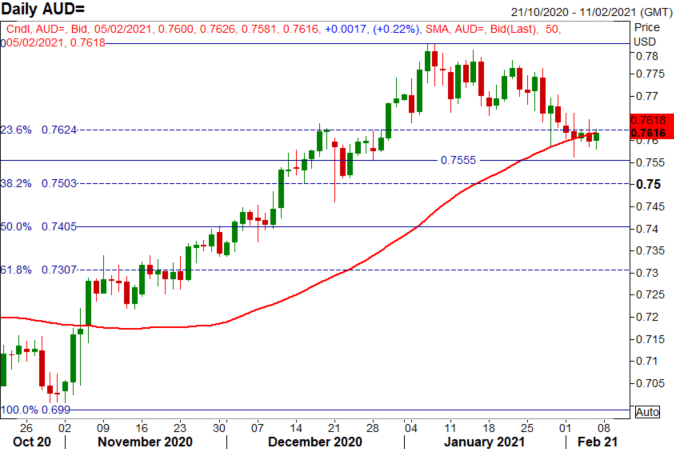 Since the first time I highlighted the richness of AUD/NZD relative to 10yr spreads, it has been a one way street for the cross, dropping to its lowest level since early Dec. As it stands, 10yr spreads continue to signal lower levels for the cross and thus this slight counter trend may be somewhat short-lived with resistance at 1.0628 and 1.0662. Alongside this, with NZ data far surpassing the RBNZ’s forecasts, risks are likely to remain tilted to the downside with my bias to fade rallies in AUD/NZD up until the central bank’s meeting on Feb 24th. 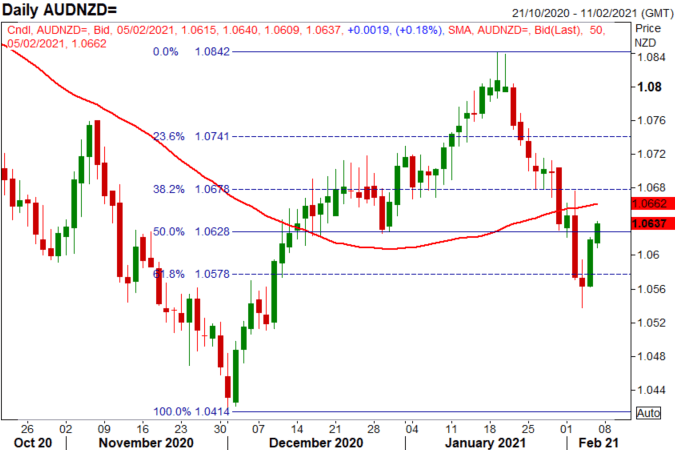 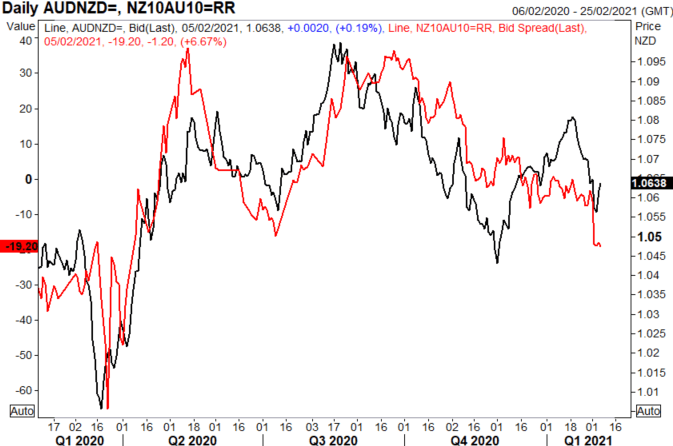