US services activity in January rose to a pandemic high as the January ISM Services PMI printed at 58.7, exceeding the forecast of 56.8. Service activity is especially important for the US economy, with services accounting for around 75% of GDP. January’s strong numbers represent the third continued monthly increase in the print. 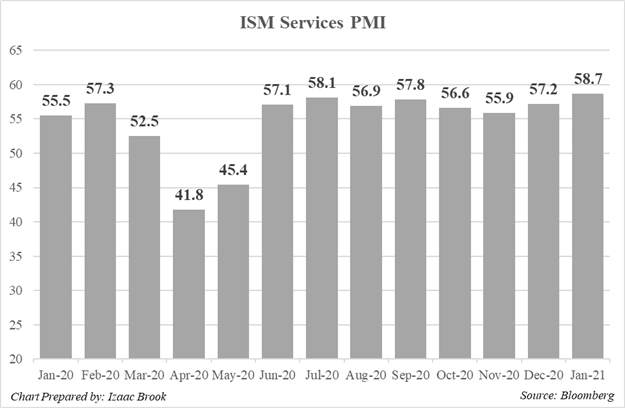 The Services PMI serves as an important proxy for US GDP data, giving markets a closer and more timely look at the key component of the US economy. PMI prints above 50 denote an expansion and below 50 denote a contraction.

Other components of the ISM report were similarly strong. The ISM Non-Manufacturing Business Activity printed at 59.9, rising since December and beating a forecast of 57.3. Service sector employment and new orders also rose compared to their December prints.

The services sector has been most affected by Covid, with the entertainment, hospitality, and travel sectors among the hardest hit. Although vaccine rollouts offer a light at the end of the tunnel, logistical hurdles and challenges still need to be met. While further fiscal support is likely, the timeline for said support remains uncertain.

A solid report from the services sector for January comes amidst continually mixed US economic data. Monday’s ISM Manufacturing PMI for January failed to meet expectations. However, January’s ADP Employment Change printed strongly. After a contraction in December for the first time since April, employment in January increased by 174k, far above the forecasted increase of 49k. January NFP and unemployment numbers print on Friday, which should give markets further clarity on the current state of the US economy. Recent NFP reports have been surprising to the downside, but the ADP Employment Change could suggest otherwise this month. 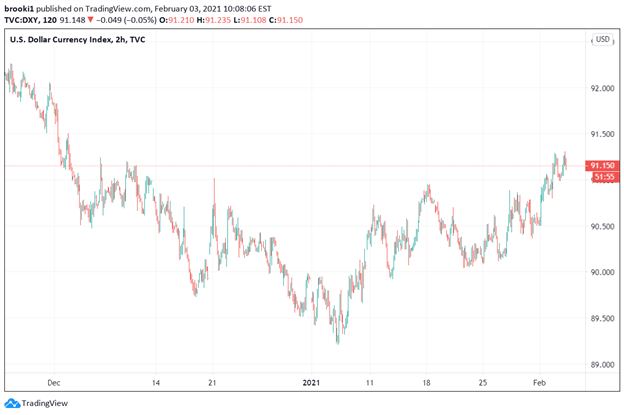 The January Services print had little impact on the US Dollar. The DXY dropped slightly ahead of the print but continues to hold around 91.00, near the two-month highs. While volatility in equity markets has declined markedly since last week, and despite largely negative sentiment, Dollar strength has continued.

The recent moves in the DXY are mirrored in EUR/USD. After strengthening to a two-year high above 1.2300 in early 2021, the pair has turned back downwards. EUR/USD is currently trading near the 1.2000 level as the Eurozone struggles with new lockdowns and further economic damage. Future Dollar strength may come from further reversals in the bullish sentiment on the other sides of USD pairs. 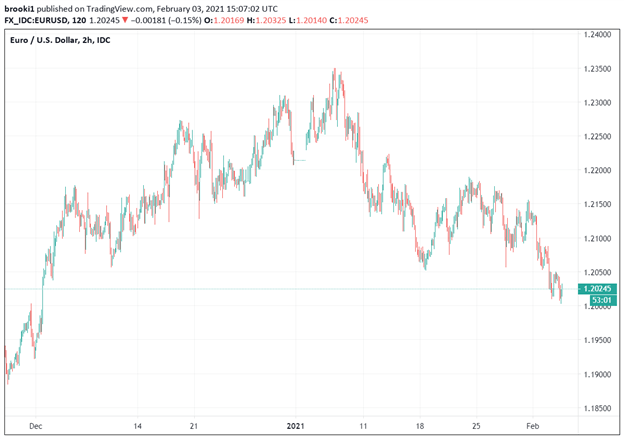