NZD Tracking the Strong NZ Economy Narrative, RBNZ May Have to Mull Tapering

Arguably one of the most dovish central banks for the majority of 2020, the RBNZ had signalled a strong possibility that they could take the OCR below zero. However, with higher than expected inflation data, a rampant housing market and a strong labour market reported last night, the RBNZ may have to start mulling a tapering of QE purchases. At the backend of last year (November), the RBNZ had been somewhat caught out by surging house prices and thus pushed back against taking rates negative, which subsequently led to a significant re-pricing of NIRP in the rates curve. Now with the NZ economy making a strong comeback, money markets are expecting the OCR to be left unchanged for the foreseeable future.

Overnight, the latest jobs report showed that the unemployment rate for Q4 fell to 4.9% from 5.3%, which is significantly lower than what the RBNZ had forecast at 5.6%. This also comes after the RBNZ underestimated Q4 CPI, which printed at 0.3ppts above the central bank’s forecast. In turn, local banks have pushed back against expectations of further easing, while the BNZ now expect a rate hike in 2022. That said, the outlook for the Kiwi is likely to remain firm in the run-up to the RBNZ meeting, particularly against the Aussie, given that the RBA has recently extended its QE program earlier than many had expected with Governor Lowe continuing to talk down the AUD. As I mentioned a couple of weeks ago, AUD/NZD had been trading at rich levels relative to 10yr spreads.

AUD/NZD Remains Tilted to the Downside 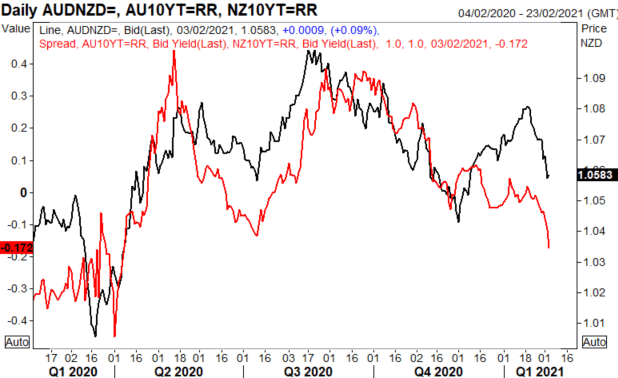 On the technical front, AUD/NZD dropped towards key support levels at 1.0561 (Jul 2020 low), however, fell short of testing the 50% Fibonacci retracement at 1.0519, which also coincides with the uptrend stemming from March 2020. Given the sizeable fall in recent sessions, there is the possibility of some reprieve, however, 1.0643 (38.2% Fib) is likely to cap gains ahead of the RBNZ meeting. Among the risks for the NZD at present would be any jawboning from RBNZ speakers, who are likely to voice their concerns over the appreciation in the currency, given that the TWI is above the central bank’s forecast by quite some margin. Although, jawboning the currency would likely spark a short-term reaction, given that the central bank is unlikely to ease further. 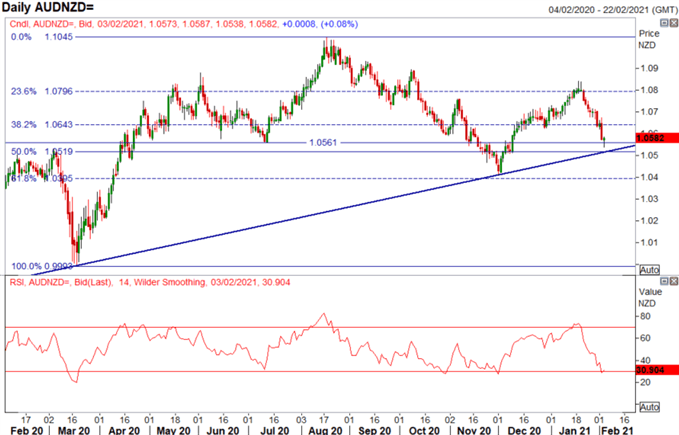