Yesterday, President Joe Biden embarked upon stimulus negotiations with Republicans which resulted in an optimistic attitude across financial markets. Emerging Market (EM) currencies are trading up against the U.S. Dollar which reaffirms the risk-on rhetoric while the Yen remains around the key 105.00 horizontal level. As both the U.S. Dollar and Japanese Yen act as safe-haven currencies, the U.S. Dollar involves more ambiguity around this role which is not the case for the Yen. With stimulus discussions underway, the Yen may regain lost gains as investors look to exit their stake in the greenback and look to higher yielding assets. The Nikkei 225 is trading higher today which could increase demand for the local currency going forward.

Notable options expiries (see below) are also expected this week which could see a tug of war between stakeholders of the respective strikes. Generally, large options expiries are preceded by price moves toward the particular strike as it approaches expiration as investors push for their options contracts to expire in the money. 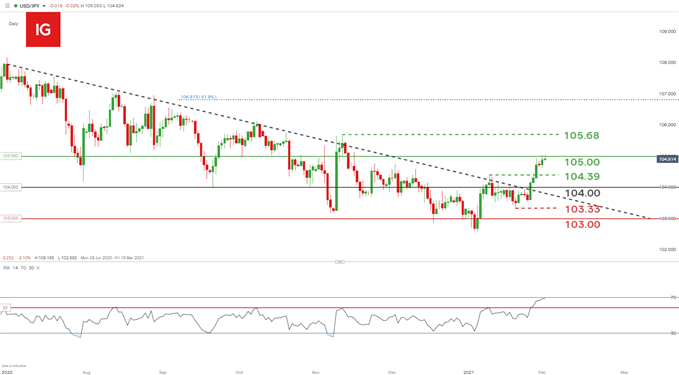 Last week USD/JPY broke above the long-term established trendline resistance (dashed black line) and has continued to gain traction toward the 105.00 psychological level. Profit taking at this level may have halted further upside momentum for now however, the longer term downtrend should not be discounted by this recent upswing.

A push higher could see the 105.68 November 2020 swing high as initial resistance while the more probable reversal lower will bring the 104.39 level back into consideration thereafter, the 104.00 support zone.

The rest of the week will entail further updates on the U.S. stimulus package deliberations while Friday’s NFP announcement (13:30GMT) should provide some short-term volatility within the FX market. It is important to note that any significant deviation from estimates could lead to large price fluctuations within the USD/JPY pair.

IGCS shows retail traders are currently net long on USD/JPY, with 50% of traders currently holding long positions (as of this writing). At DailyFX we typically take a contrarian view to crowd sentiment however, the fact that both longs and shorts stand at 50% results in a mixed signal.