The FTSE 100 rose sharply in yesterday’s session as bullish sentiment returned after a gloomy week caused by a disruption in the markets from a cohort of retail investors.

Why a Rise in Retail Trading May Signal Another Mania

The London blue-chip index is attempting to push higher again this morning after clearing the 61.8% Fibonacci at 6,489, a significant resistance area, holding on to wider bullish sentiment following through from Asia. That said, the index is lagging compared to its European peers, mostly due to disappointing earnings released from BP this morning, falling 3.25% since the release.

Fresnillo PLC is at the bottom of the list as silver prices correct yesterday’s moves, with the mining company falling 4.3% as of writing. On the other side of the spectrum, Intercontinental Hotels Group (+4.6%), Whitebread (+4.5%), Prudential (+3.5%), and International Consolidated Airlines (+3.4%) are leading the gains in the FTSE 100, pointing to an improved perception of the economic recovery from the Covid-19 health crisis as the vaccine rollout continues to pick up steam in the United Kingdom.

New daily cases have decreased significantly since the peak seen on January 8th, with daily deaths having dropped to 406 from a peak of 1,800 just two weeks prior. The country remains in a strict level 4 lockdown which prohibits pubs and restaurants from opening and social interactions are heavily restricted. Last we heard from Prime Minister Boris Johnson was that restrictions may be eased by Easter, and the reduction of new cases seems to suggest that is the direction we’re heading in, but a strong presence of the South African variant in some areas of the country may cause further disruption in the weeks to come. 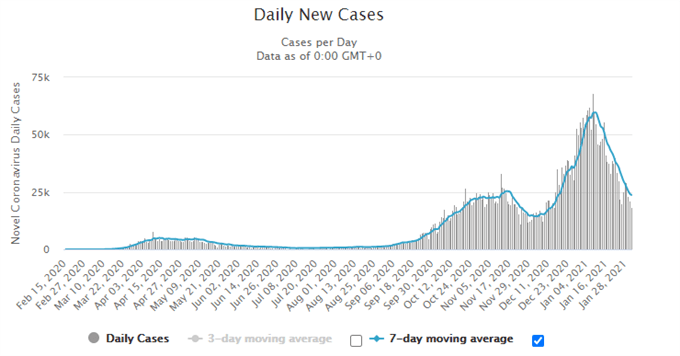 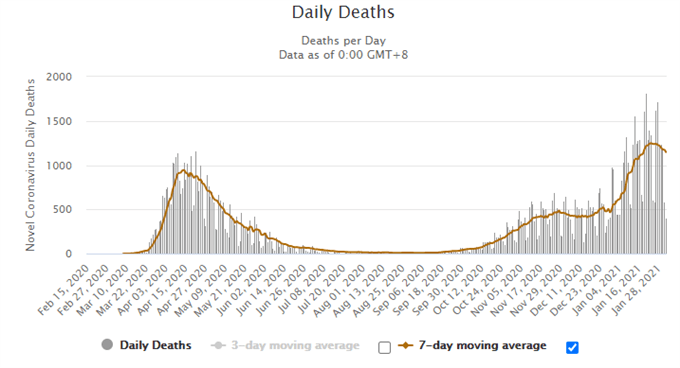 The FTSE 100 has been struggling to keep close to the levels seen before the coronavirus outbreak back in March, unable to hold above the 76.4% Fibonacci (6,894), a level that other major European indices have broken above much easily. The lag in the FTSE 100 was mostly due to Brexit concerns when the initial recovery was gaining traction in the summer months, but ongoing concerns about the recovery of the economy continue to drag the index behind its peers.

The 61.8% Fibonacci may now act as short-term support, although further bullish momentum may struggle to bring the FTSE 100 above the 6,600 mark, where the 50-day moving average is now residing. A break above this area is likely to consolidate further buyer interest, with the 6,800 mark being the next objective in its attempt to push higher. To the downside, the 6,300 level continues to show strong support before the horizontal 6,255 line comes into play, the lowest level since the strong rise back in November. Below this area, the 200-day moving average resides on the 6,200 mark, in close proximity to 50% Fibonacci at 6,162.