Bullish sentiment has returned to equity markets to start the month of February as retail traders continue to target specific assets to prop up their value. The realization of the ability to inflict damage by a herd mentality saw investors flock to safety last week, causing the DAX 30 to pullback to recent support levels, lessening the extent to which the German index is overbought.

Why a Rise in Retail Trading May Signal Another Mania

Retail Sales: Data released this morning showed retail sales fell 9.6% in the month of December, a steeper decline than expected but not entirely surprising given the nationwide lockdown the country faced during that time. Angela Merkel has extended the restrictions until mid-February at which point we may see some easing given the reduction in daily infection and death rates since the peak seen in mid-December. 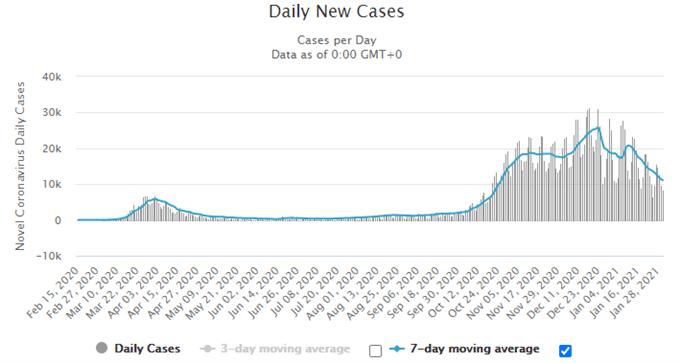 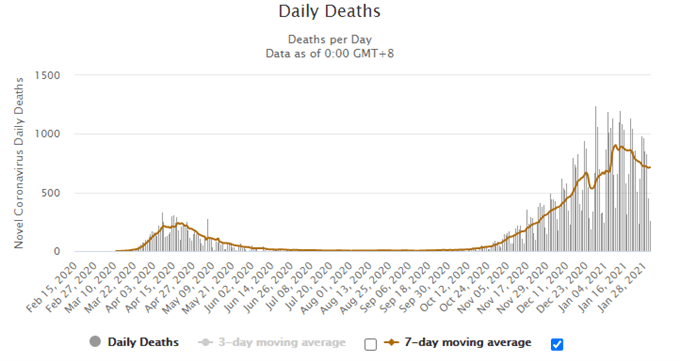 Vaccine issues: Germany has threatened legal action against AstraZeneca as it has been unable to deliver on its promised vaccines. The pharmaceutical company has alleged it faces problems at one of its European factories and is now said to only be able to deliver one-quarter of the doses originally promised to the European Union. The delay in vaccinations has caused sentiment to dampen as the expected effect on economic recovery is likely to be dragged out.

DAX 30:Technically, the recent sell-off has reduced the overbought conditions bringing the DAX 30 in line with the levels seen at the end of last year. Strong support at 13,314 has seen the German index regain upside momentum this morning, although short-term resistance at the 13,600 level may see price consolidating during today’s session.

If buyers are able to push above this resistance, the next area to look out for will be 13,720, where bullish momentum was rejected last Thursday. At this point, I don’t think it is very likely that we see a re-test of the 14,000 mark given the lack of fundamental and technical support amid current circumstances, so we may see another pullback towards 13,000 before the DAX 30 is able to attempt a new all-time high.