The Euro remains soft as the currency tests the 1.21 handle. Overnight, a brief bounce in the currency had been curbed by the 50DMA (1.2139) and thus keeping the currency within a relatively narrow range. This week has largely centered around the ECB stepping up their dovish rhetoric against the appreciation against the Euro, which had been particularly evident following surprisingly dovish comments from ECB’s Knot, going against his typically more hawkish stance. The ECB member stated that Euro strength will take prominence for the ECB if it threatens inflation outlook, adding that they have the tools to act on Euro strength. Alongside this, Knot stated that the ECB had not reached the lower bound and that there was still room to cut rates. That said, renewed rhetoric of the Euro is somewhat of a surprise given that the ECB had seemingly cut back on their commentary on the currency at last week’s monetary policy meeting meeting. However, the comments from Knot does come after recent source reports that the ECB would study the impact of ECB vs Fed policy on exchange rates.

On the technical front, momentum signals are aligned on the bearish side for the Euro, in which a break through 1.2100 puts 1.2050-60 in focus. As a reminder, with today being month-end rebalancing, price action may be somewhat exacerbated. As it stands, investment banks models tout weak USD buying, a change from previously calling for marginal USD selling. On the topside, initial resistance is situated at 1.2139 with 1.2172 above. 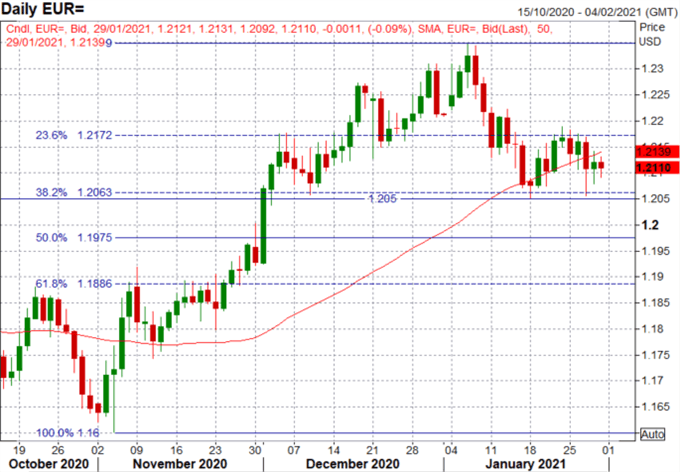 German GDP for Q4 rose 0.1% marginally beating expectations of 0.0%, however, the recovery had slowed notably given the impact from a second wave of COVID cases, which in turn saw another lockdown imposed through to the end of the year. As such, German GDP had contracted 5% for 2020. That said, there does appear to be a diminishing impact on economic activity from a resurgence in COVID cases.