Despite a host of major risk events scheduled to be released this week, Silver remains rangebound, with only minor movements so far occurring within a confluent zone, established between key Fibonacci levels.

With both Silver and Gold exhibiting safe-haven appeal, the battle between risk-on and risk-off sentiment continues to play out as the delayed vaccine rollout combined with a decrease in business activity weighs on the highly anticipated Fiscal Stimulus package. Although President-elect Joe Biden’s Democratic party are all in favor of the large $1.9 Trillion deal, the Republicans continue to push for a much smaller deal to be implemented, emphasizing that the vaccine rollout should remain a priority.

Meanwhile, this week’s major risk events may create additional volatility, driving price action in either direction. For the USD, apart from Wednesday’s highly anticipated Federal Reserve policy meeting, other major data releases listed on this week’s economic calendar include January’s consumer confidence number (Tomorrow), December’s Durable goods figure (Wednesday), advance estimate for Q4 GDP (Thursday) and the December PCE report (Friday). With the renewal of lockdown measures, all these reports have the potential to influence the demand for XAG/USD and other major commodities.

Silver prices continue to honor the Fibonacci retracement levels of both the historical (2008 low – 2011 high) and short-term move (March 2020 low – August 2020 high), forming an area of confluence that continues to hold bulls and bears at bay. Currently, the 23.6% retracement provides support at 2544 while the key psychological level of 2600 holds as resistance. Meanwhile, the Moving Average Convergence/Divergence (MACD) remains on the zero-line, preceding the bearish MACD crossover that occurred earlier this month. 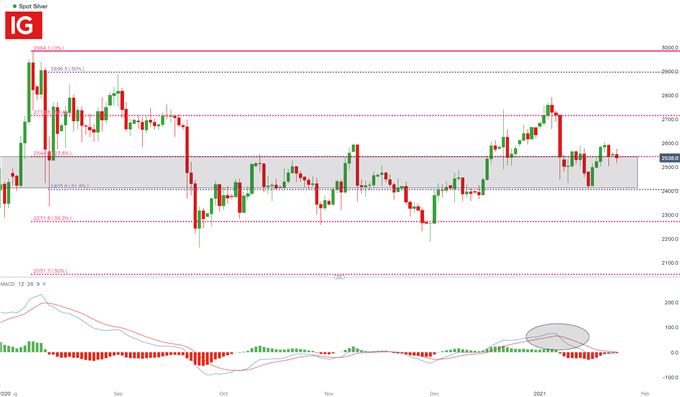 For now, support potential remains around the key psychological level of 2500 with the 61.8% Fibonacci retracement level providing additional support at 2409.8 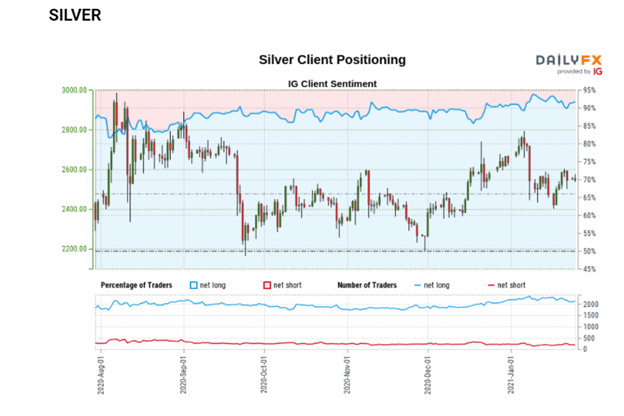 Traders are further net-long than yesterday and last week, and the combination of current sentiment and recent changes gives us a stronger Silver-bearish contrarian trading bias.