The latest ZEW readings for both the Euro Area and Germany came in better than expected this morning, giving the single currency a nudge higher. German economic sentiment rose to 61.8 from a prior 55.0, while Euro Area expectations rose to 58.3 from 54.4 in December.

“Despite the uncertainty about the further course of the lockdown, the economic outlook for the German economy has improved slightly. The results of the ZEW Financial Market Survey in January show that export expectations in particular have risen significantly,” noted ZEW President Achim Wambach.

The Euro picked up slightly post-release and currently trades around 1.2125 against the US dollar. The greenback is currently flat to marginally lower in Europe as traders wait for Treasury secretary-elect Janet Yellen to give her confirmation speech to the Senate later today. In prepared remarks already distributed, Ms. Yellen is expected to say that the ‘smartest thing we can do is go big’ otherwise the US economy risked ‘a longer and more painful recession’.

While the Euro is stronger against the US dollar today, further tests lie ahead this week. The ECB will announce its latest monetary policy decision on Thursday, and while no changes are expected, the post-release press conference may give some further clues to the central bank’s current thinking, while on Friday the January Markit PMIs are released. The pair are now touching the 50-day simple moving average and will need to make a confirmed break higher before attempting resistance at 1.2202 off the 20-day sma. 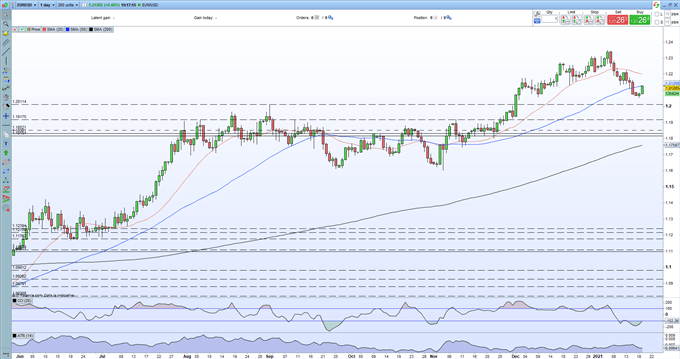 IG Retail trader data show 47.71% of traders are net-long with the ratio of traders short to long at 1.10 to 1. We typically take a contrarian view to crowd sentiment, and the fact traders are net-short suggests EUR/USD prices may continue to rise. Positioning is more net-short than yesterday but less net-short from last week. The combination of current sentiment and recent changes gives us a further mixed EUR/USD trading bias.

What is your view on EUR/USD – bullish or bearish?? You can let us know via the form at the end of this piece or you can contact the author via Twitter @nickcawley1.