Equities are broadly weaker this morning as Joe Biden hinted at tax cuts while introducing a new stimulus package last night. Meanwhile, the safe-haven Dollar is up despite the Fed pointing out last night that they will remain accommodative in the near future.

President-elect Joe Biden unveiled last night a stimulus package worth $1.9 trillion, an expected decision that was already discounted in the markets, but suggested tax hikes caused a small correction in equities, led mostly by the tech-heavy Nasdaq. The extra spending has caused bond yields to rise rapidly, fuelling a rotation from technology and value stocks to growth stocks.

In Europe, Covid-19 cases continue to rise rapidly, with new restrictions imposed in almost every country to try and combat the post-holiday wave. Germany continues to see shockingly high infection and death rates, with its highest death toll seen this week at 1,244 fatalities in just 24 hours. 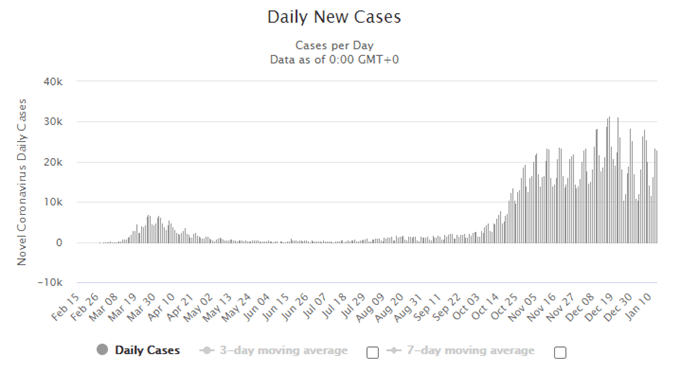 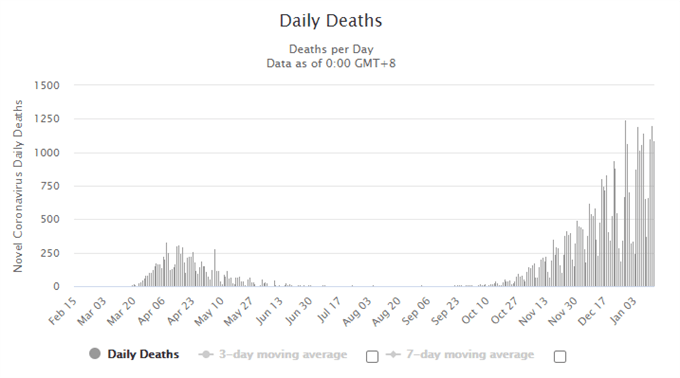 German Chancellor, Angela Merkel, has urged senior officials to take fast action and further strengthen the restrictions in order to try and stop the rapid spread of the virus, while hinting that FFP2 masks may become mandatory.

Meanwhile, the minutes from the ECB’s monetary meeting in December were released yesterday, showing that the Central Bank is concerned about the length of the economic crisis given the second wave, with heightened risks of insolvencies as activity has reduced significantly. It also confirms the concerns regarding the strengthening euro as the recent appreciation could play a key role in the subdued inflation outlook, an ongoing concern of the ECB.

Looking ahead, the central bank is likely to remain on the side-lines as long as possible as the health crisis plays out, given that the short-term path of the economy is driven by the virus regardless of policy action and they have already pledged to keep monetary policy supportive until 2022. That said, the minutes show that there seems to be a divide between policymakers about the appropriate amount of stimulus, with some believing that the moveable ceiling of €1.85 trillion is too low, whilst other believe it is too high.

The Dax has been struggling to achieve a consistent break above the 14,000 mark as local risk appetite has taken a hit from new restrictions, although momentum remains positive as price holds comfortably above the February 2020 high (13,830). Short-term support is also likely to arise at the 13,800 mark, where previous selling pressure has been halted. More immediate support can be seen at current price around 13,910, where an ascending trendline is holding for now.

Moving averages are stacked in bullish form, and the stochastic indicator on the 4-hour chart is showing that current price is venturing into oversold territory following on from this morning’s correction, which may suggest price will pick up further in the day.

A daily close above the all-time high seen on January 8th (14,134) would garner further bullish support towards the 14,200 mark, although overbought conditions remain on the medium term, so further corrections cannot be ruled out.