Sterling has strengthened against the US dollar, Japanese Yen and the Euro since Tuesday as the Governor of the Bank of England (BoE), Andrew Bailey, stated that there were a lot of issues with negative interest rates with one of those being that it could hurt banks.

The implementation of negative interest rates is often viewed as a last resort, something the UK is hoping to avoid as it remains optimistic of an economic recovery, spurred on by the great progress in administering Covid-19 vaccines.

The market reacted favorably to the comments as risk appetite looks to have improved for the Pound, which traded to its highest levels since the latter part of last year (lower EUR/GBP levels).

The recent sell-off has EUR/GBP trading near the 0.8860 level of support which has been effective in holding the market up since June 2020 and represents a key level for the pair. The MACD indicator shows that momentum may continue and should that materialize, it would bring the next level of support (0.8830) into focus.

Failure to break and close below this key level may interest bulls as the market has reversed off the 0.8860 level in the past. A move higher could see the pair trading towards the nearest level of resistance (previous support) at 0.8994. Further bullish momentum could see an approach towards the psychological level of 0.9000 and potentially even the 0.9090 level of resistance. 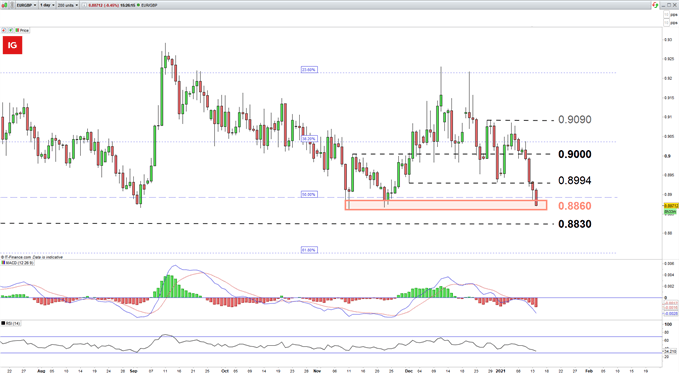 Taking a closer look, using the 4-hour chart, there is an area of confluence where the descending trendline intersects the level of resistance at 0.8860. Despite the recent sell-off, the MACD indicator highlights a potential bullish MACD crossover while the relative strength index (RSI) remains in oversold territory. 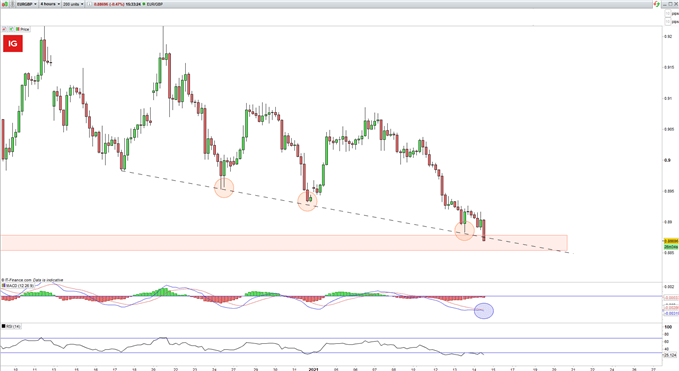 Risk Events on the Horizon

This coming week there are a number of events identified as potentially “high impact” and should be considered: 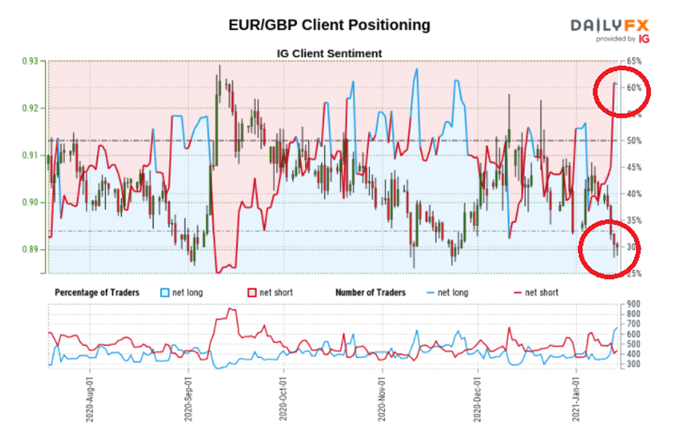