WTI crude oil prices surged more than 3% to US$ 53.9, hitting their highest level seen since February 2020. A large draw in the API crude inventories and a weakening US Dollar gave oil prices a fresh boost alongside reflation hopes. The oil report pointed to a 5.82-million-barrel decline in inventories for the week ending January 8th, compared to a baseline forecast of a 1.66-million-barrel drop.

Recently, prices appear to be riding favourable tailwinds since Saudi Arabia unilaterally announced a production cut of 1 million bpd in February and March amid dissents among OPEC+ members. Since then, WTI prices have surged by more than 13% on hope that Saudi’s willingness and ability to cut could effectively rein market supply and shelter prices through the Covid pandemic.

Oil prices are also buoyed by stimulus and reflation hopes after Democrats gained control of the Senate, raising the likelihood of further spending that aims to revitalize demand and output in the long term. President-elect Joe Biden will unveil a new stimulus plan on Thursday, which will be closely eyed by commodity and currency traders for clues on future spending and inflation outlooks.

The near-term energy demand outlook, however, is still overshadowed by tightening border restrictions and lockdowns around the globe, as more cities and states are facing a new wave of new coronavirus strains that were reported to be more transmissible than the original type. Malaysia has declared a state of emergency on Tuesday after imposing a 14-day lockdown in key areas. China imposed lockdowns in parts of the northern province of Hebei and discouraged people from traveling between provinces to curb the spread of virus. South Korea’s December unemployment rate unexpectedly hit a 10-year high due to the pandemic’s impact.

According to the EIA’s weekly petroleum data report, total US crude inventories are at 485.5 million barrels, about 9% above the five year average for this time of year. US crude oil refinery inputs edged up by 89,000 barrels per day to 14.4 million barrels a day last week, with refineries operating at 80.7% operable capacity – slightly higher compared to the end of last year.

Oil traders are anticipating a 3.0-million-barrel decline in inventories for the week ending January 8th 2021, with the actual data coming in later today. Last week, crude inventories fell by 8.01 million barrels, far exceeding markets’ forecasts. Oil prices have historically displayed a negative correlation with inventories, with a past-12 month correlation coefficient of -0.403 (chart below). 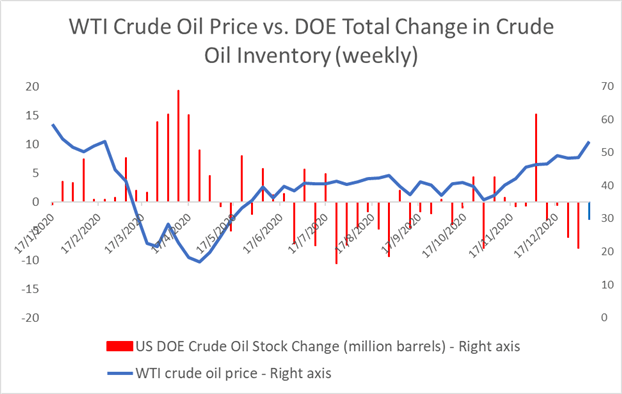 Technically, WTI breached above a key chart resistance of US$ 50.0 and has since opened the door for further upside potential with an eye on US$ 54.6 – the previous high observed in end February 2020. Overall momentum is biased towards the upside, as suggested by the formation of the MACD bullish crossover. Further stretching beyond the upper Bollinger Band could hint at short-term pullback however, as prices appear to be temporarily overbought.