Crude oil prices edged slightly lower on Tuesday after falling 1.9% on the day before, largely weighed by deteriorating pandemic situations in the US and Europe as well as uncertainties surrounding an OPEC+ meeting scheduled on January 5th. Divergence between Russia and Saudi Arabia with regards to whether to increase oil supply in February remains a top risk. A seeming lack of cohesion among the oil cartel and its allies amounts to near-term uncertainty to oil prices, on top of many other concerns such as viral mutations and the introduction of further lockdowns in the UK, Germany and Japan.

Prior to this, OPEC+ have reached an agreement to gradually unwind production cuts this year, starting with a 0.5 million bpd increase in January and then meet monthly to decide production levels for the subsequent month.

The energy demand outlook is overshadowed by tightening border restrictions and social distancing measures around the globe, as the healthcare system is strained by rising infections and hospitalizations. An initial rollout of Covid-19 vaccines for front-line healthcare workers may not warrant an immediate rebound in underlying energy demand until vaccines become widely available to the public. However, markets have seemingly priced in a brightened demand outlook into WTI’s impressive 45% price rally from November to end-December. This renders oil prices vulnerable to profit-taking activity should reality deviate from exuberant assumptions.

Sentiment remains downbeat as US stocks fell sharply on the first trading day of 2021, dragging Asia-Pacific equities lower with pandemic concerns dominating traders’ minds. Georgia’s Senate runoff elections today may serve as a key catalyst for the US Dollar, which will then influence broader asset classes, including commodities.

US DOE crude oil inventories have fallen to 493.46 million barrels from a recent peak of 503.2 million barrels seen in early December (chart below). Stockpiles have been declining for three weeks in a row, gradually reversing from the 15.20-million-barrel increase seen in the first week of December. 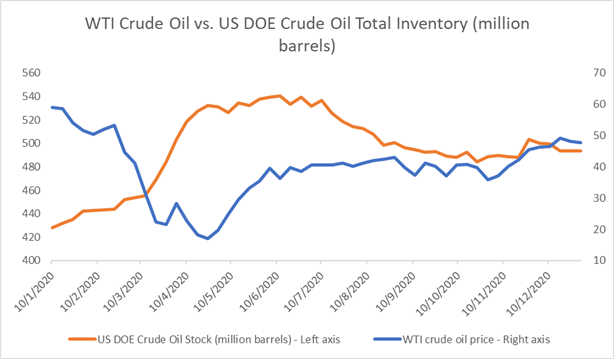 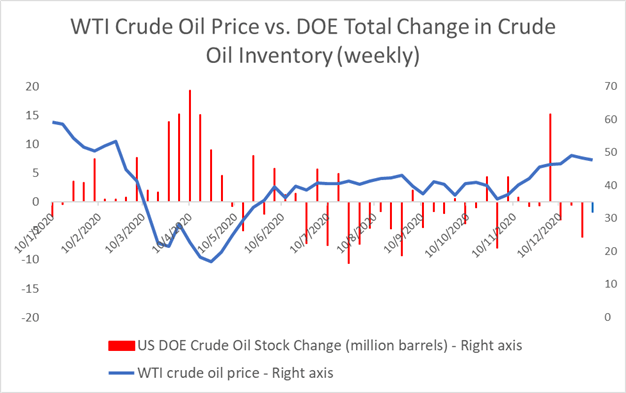 Technically, WTI entered a consolidative period in mid-December with downward momentum prevailing. An immediate resistance level can be found at US$ 49.40, which it failed to breach on a second attempt lately. Price has since retraced back to the 20-Day SMA looking for immediate support. A break below the 20-Day SMA may open the door for further losses, with an eye on US$ 45.80 – the 23.6% Fibonacci retracement.