GBP/USD is consolidating after its strong push higher after the EU and the UK reached a Christmas Eve deal to govern their trade once the Brexit transition period ends on December 31 and the UK becomes a fully independent nation again.

UK Prime Minister Boris Johnson is expected to win by a large majority when Members of Parliament vote this week to ratify the text.

However, once that consolidation is over, GBP is now well placed to extend its gains towards the 1.40 level long-term and perhaps even towards the high above 1.43 reached in April 2018. GBP/USD is already trading at its highest level since later that month, suggesting its trend higher remains firmly in place. 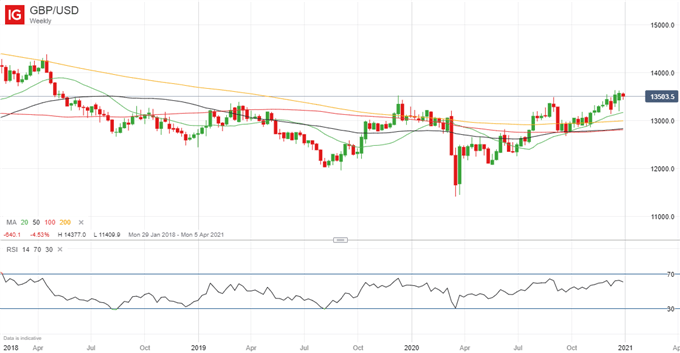 In the meantime, GBP/USD is benefiting from a broadly risk-on tone in the markets on hopes that the much-delayed US pandemic relief program will pass through the US Congress and become law. The $2.3 trillion package has now been approved by outgoing President Donald Trump, and the House of Representatives has voted to increase stimulus payments to qualified Americans to $2,000 from $600 – leaving just the Senate to agree it.

Optimism around the package has reduced demand for the safe-haven US Dollar and increased demand for assets ranging from stocks and oil to risk-on currencies such as Sterling and the Euro, the Australian Dollar and the New Zealand Dollar.