Asia-Pacific markets may kick off the week with a positive tone as President Trump hinted at “good news” on the stimulus bill after refusing to sign off last week. Major US equity futures are drifting higher at the open amid a relatively quiet week for trading due to lower liquidity and the holiday break. Australian and New Zealand stock markets are shut on Monday and will resume trading on Tuesday. Major global markets will be closed on Friday (New Year’s Day).

China’s State Administration for Market Regulation started an antitrust probe into Alibaba Group on alleged monopoly behavior on December 24th, causing Alibaba’s share price to tumble 8.13% in Hong Kong. Other major Chinese tech companies suffered a heavy selloff on the same day as sentiment soured. JD healthcare (-15.64%), Tencent (-2.63%), JD.Com (-2.28%) and Meituan (-2.72%) were among the worst performers, whereas financial stocks were doing the heavy lifting (chart below).

Alibaba Group is China’s leading e-commerce giant and also the parent company of Ant Financial, which halted its mega IPO in early November due to regulatory concerns. A tightening regulatory environment may bring headwinds for Alibaba in the near term, and may affect broader sentiment in Chinese tech firms listed both in Hong Kong and New York. Alibaba Group is cooperating with the investigation team and the process was reported as smooth and orderly over the weekend.

While the UK and EU are moving closer to striking a post-Brexit trade deal before the December 31st deadline, Prime Minister Boris Johnson has admitted that the deal “perhaps does not go as far as we would like” over access to EU markets for financial services. The British Pound paused a three-day rally and traded lower on Monday’s open. A potential conclusion of the Brexit trade deal is among the top market events to watch out for this week.

The trend of Covid-19 cases in the US showed signs of abating (chart below), which is encouraging for both Wall Street and Main Street. The number of daily new cases has fallen to 225k on December 26th from a recent peak of 280k on December 11th. The gradual rollout of Covid-19 vaccines across the US and Europe may offer fresh hope for the global fight against the pandemic.

Meanwhile, China’s Sinovac Covid-19 vaccine was proven 91.25% effective in a late-stage trial in Turkey and the country is preparing to license the vaccine for rollout. A Phase 3 clinical trial for the Sinovac vaccine conducted in Brazil showed a more than 50 percent success rate, a lower but still encouraging result. 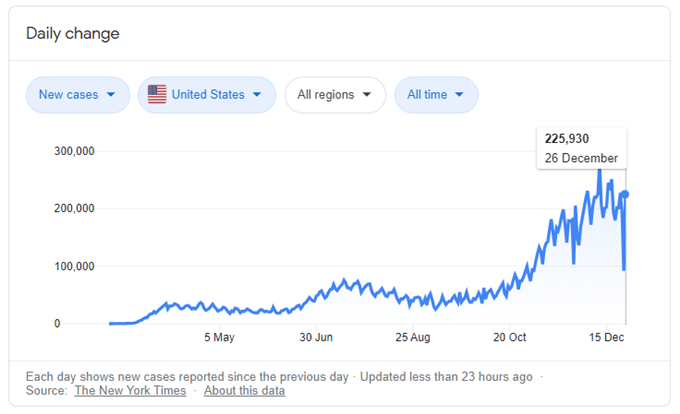 Looking ahead, Thursday’s release of China NBS manufacturing PMI and US weekly jobless claims are among the top events amid a relatively quiet week in terms of macroeconomic data. Find out more on DailyFX calendar: 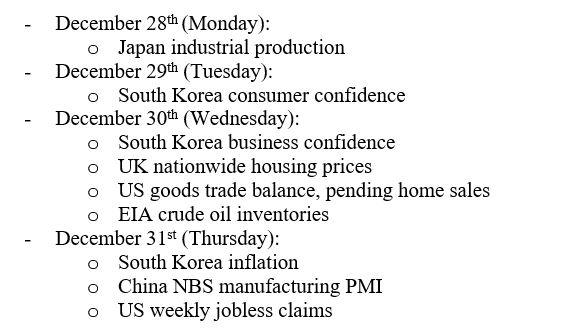 Technically, the S&P 500 index appears to be edging higher within an “Ascending Channel” as highlighted in the chart below. The uptrend is well-supported by its 20-Day Simple Moving Average (SMA) line, although some short-term pullbacks were observed. Immediate support and resistance levels can be found at 3,660 (38.2% Fibonacci extension) and 3,705 (50% Fibonacci extension) respectively.

The Hang Seng Index (HSI) entered a consolidative phase in December, forming lower highs and lower lows – a typical bear market setup. The index is testing a key support level at its 50-Day SMA line, breaking below which may open the door for further downside potential with an eye on 25,880 – the 38.2% Fibonacci retracement.