A cyclical-led session on Wall Street may hint at a moderate ‘risk on’ trading for Asia-Pacific markets, with equity futures across Japan, Hong Kong, Australia, South Korea and Singapore pointing to gains. Australia’s ASX 200 index opened 0.6% higher as rising metal prices gave its energy (2.22%) and material (+1.10%) sectors a boost. The Australian market will be shut on Friday and next Monday before resuming trading on Tuesday.

Trading could be light though as investors prepare themselves for the Christmas and New Year holidays. The Hong Kong Exchange is trading half-day on Thursday, and major stock markets will be shut on December 25th with the exception of mainland China.

Positive news on the post-Brexit trade talks between the UK and Europe propelled the Sterling overnight, sending the US Dollar lower. A weaker dollar gave a boost to crude oil and metals such as iron ore, copper gold and nickel, which fell sharply from their recent highs. Small cap stocks and cyclical sectors, namely financials and energy, outperformed whereas information technology stocks fell. The commodity-linked Australian Dollar and the Norwegian Krone were among the best performing G10 currencies.

Uncertainties remain over the US stimulus package after President Trump expressed his displeasure with the US$ 900 billion bill that was approved by the US Congress after months’ of negotiations. The President asked Congress to amend the bill by increasing stimulus checks and removing items that he considers unnecessary. The abrupt move led to heightened uncertainty and may delay the distribution of relief aidfunds to individuals and businesses who are suffering from the latest pandemic wave.

Perhaps more worryingly is the spread of thenew coronavirus strain found in the UK, which flags a deeper concern of potential viral mutations that are undiscovered in other parts of the world. This could hinder a medium- to long-term recovery if vaccine development and manufacturing can not catch up the pace of viral mutations and spread. This could derail a seemingly smooth recovery trajectory, pointing to further need for stimulus and monetary easing. According to Bloomberg, the new Covid-19 strain is possibly already in the US, Germany, France and Switzerland.

On the macro front, US weekly jobless claims fell to 803k in the week ending December 19, compared to 892k in the week before. The reading was not only better-than-expected, but also marked its first decline observed after two weeks of gains (chart below). The core PCE price index – a key inflation gauge for the Fed – came in a 1.4%, which is slightly lower than baseline forecast of 1.5%. Durable goods order expanded 0.9% MoM, beating consensus of 0.6% growth. Read more on DailyFX’s economic calendar. 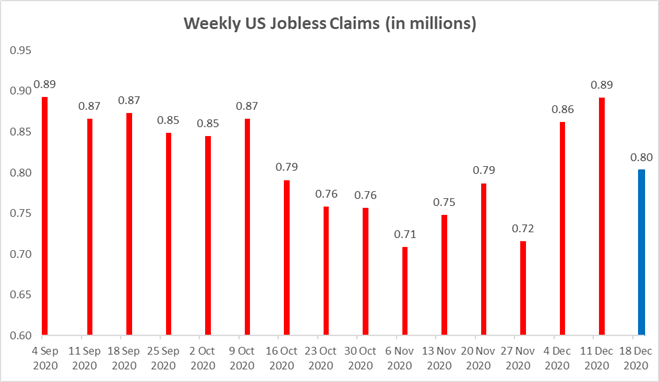 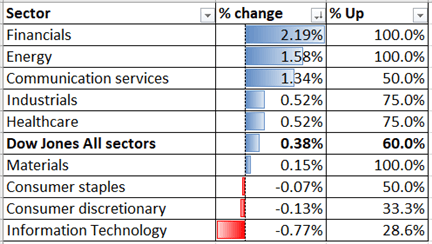 The S&P 500 index appears to be ranging higher within an “Ascending Channel” as highlighted in the chart below. The uptrend was well supported by its 20-Day Simple Moving Average (SMA) line, although some minor corrections were observed. Immediate support and resistance levels can be found at 29,850 (76.4% Fibonacci extension) and 30,350 (the upper Bollinger Band) respectively.

The ASX 200 index is trending up within the “Ascending Channel” as highlighted below. The overall bullish trend remains intact but bullish momentum appears to be faltering these days, as suggested by falling MACD trendlines. Immediate support and resistance levels can be found at 6,580 (lower Bollinger Band) and 6,740 (upper Bollinger Band) respectively.

The Hang Seng Index (HSI) entered a consolidative phase in December, forming lower highs and lower lows – a typical bear market setup. The index is testing a key support level at its 50-Day SMA line, breaking below which may open the room for further downside potential with an eye on 25,880 – the 38.2% Fibonacci retracement.