As mentioned previously, the provision of extraordinary fiscal and monetary stimulus measures in response to the novel coronavirus pandemic has underpinned Bitcoin prices since the March nadir, with the popular cryptocurrency surging over 505% and breaking above the psychologically imposing $20,000 mark earlier this month.

These gains look set to continue given prices have broken out of a long-term continuation pattern. However, a near-term pullback could be in the offing, as the recent surge to fresh yearly highs appears to be running out of steam. Here are the key technical levels to watch for the weeks ahead. 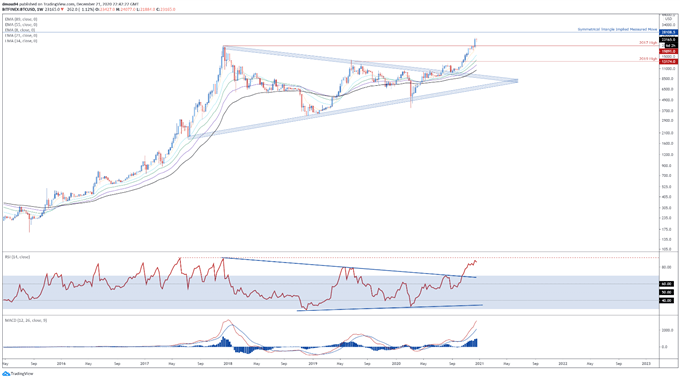 The longer-term technical outlook for Bitcoin remains skewed to the topside, as prices burst above resistance at the 2017 high (19891) and eye a push to fulfil the Symmetrical Triangle’s implied measured move (28108).

Bullish moving average stacking – the faster MA’s positioned above their slower counterparts – in tandem with the RSI and MACD indicators surging to their highest respective levels since December 2017, is indicative of swelling bullish momentum.

However, a short-term pullback towards former resistance-turned-support at the 2017 high (19891) could be in the offing, if prices fail to gain a firm foothold above the psychologically imposing 24000 mark on a weekly close basis.

Slipping back below the 2017 high would probably trigger a more extensive pullback and bring the 2019 high (13174) into the crosshairs.

Alternatively, a weekly close above the yearly high (24244) would likely signal the resumption of the primary uptrend and carve a path for price to probe psychological resistance at 28000. 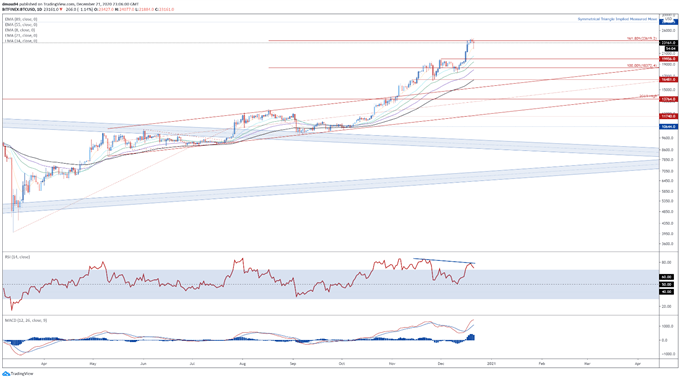 Zooming into the daily chart hints that the popular cryptocurrency could be at risk of a near-term pullback, as prices fail to remain constructively perched above the 161.8% Fibonacci expansion (23619).

Bearish RSI divergence suggests that the recent surge to fresh record highs may be running out of steam.

With that in mind, sellers may drive Bitcoin back towards the 50% Fibonacci (21147), with a daily close below opening the door for price to retest former resistance-turned-support at the December 1 high (19956).

However, an extend correction lower seems relatively unlikely, given prices are continuing to track firmly above all 5 exponential moving averages.

Therefore, a continued topside push could be on the cards if psychological support at 22000 holds firm, with a daily close above the December 20 high (24244) required to open the door for buyers to drive price towards the Symmetrical Triangle’s implied measured move (28108). 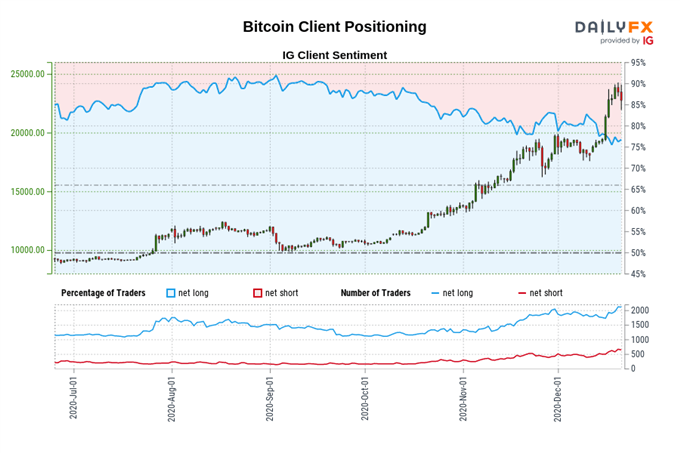 Positioning is more net-long than yesterday but less net-long from last week. The combination of current sentiment and recent changes gives us a further mixed Bitcoin trading bias.