The Federal Reserve released results from the second round of stress tests this afternoon. Banks were deemed to have strong capital levels and remained a source of strength for the overall economy. Financial and bank stocks reacted to the upside following the Fed’s assessment of the banking sector crossing the wires. The Financial Select Sector SPDR Fund ETF rose nearly 4% in after-hours trading.

In both hypothetical simulations, banks would collectively lose more than $600 billion, while capital ratios far exceeded the 4.5% minimum in each scenario. The Federal Reserve also announced that it will allow banks to resume share buybacks and dividends with restrictions in the first quarter of 2021.

The initial round of 2020 stress test scenarios was announced in early February. The scenarios envisioned were much less severe than the reality of the COVID-19 pandemic. Despite the massive changes to the economic outlook, the stress tests continued as planned, with one addition. A “sensitivity analysis” was conducted based on potential pandemic-driven scenarios.

The stress test results were announced in June, but the sensitivity analysis was not publicized on a bank-to-bank basis. The stress tests had been created in 2009 to help markets better understand the banking system’s exposure to further losses from the economic crisis. The first round of the 2020 stress tests failed to provide markets with the same level of clarity.

In response to continued economic uncertainty and the criticisms of the first stress test, the Fed announced a second round of tests in September. The two hypothetical scenarios in the second round of testing focused on severe global downturns and substantial stress in financial markets.

The first scenario, “severely adverse,” encompassed unemployment rates as high as 12.5% at the end of 2021, which declined to roughly 7.5% by the end of the simulation. Gross domestic product declined roughly 3% from Q3 2020 through Q4 2021. Accompanying this is a substantial economic contraction abroad. The second scenario, “alternative severe,” featured an unemployment rate that peaked at 11%, but remained elevated throughout the scenario, declining to roughly 9% by the end of the simulation. In this scenario, GDP declined by about 2.5% from Q3 to Q4 of 2020. The chart below, courtesy of the Federal Reserve, outlines the two different hypothetical scenarios. 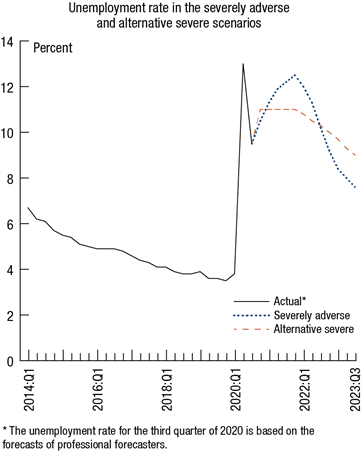 Source: Board of Governors of the Federal Reserve

With vaccines now available, the scenarios of the second stress tests seem more severe than the economic future the country faces. Nevertheless, an understanding of how banks would fare in these scenarios is important for informing markets on financial stability. Financials have struggled in 2020, lagging the broader S&P 500 Index by quite a distance.