The Australian Dollar pushed higher against its major counterparts on the back of better-than-expected employment data for the month of November.

The unemployment rate fell to 6.8%, beating consensus estimates of a 7.0% print, while the participation rate climbed to 66.1%.

These promising results may diminish the probability that the Reserve Bank of Australia will adjust its monetary policy settings in the near term. After all, the central bank originally forecast the jobless rate to peak just shy of 8%.

This will likely open the door for the local currency to continue pushing higher in the near term as investors discount further easing from the RBA. 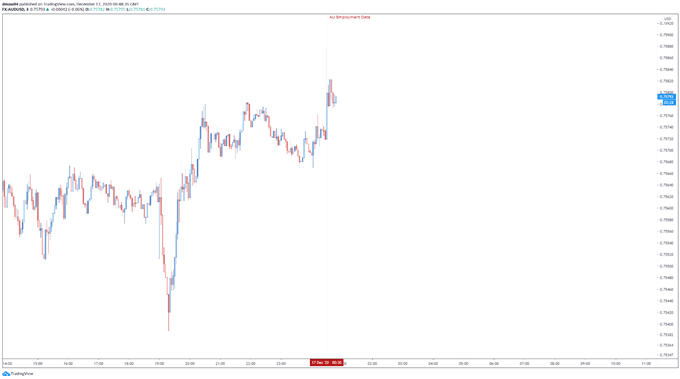 As mentioned in previous reports, Australia’s successful suppression of the novel coronavirus has allowed the nation to return to a level of normalcy, with the border between its two most populous states – Victoria and New South Wales – reopening at the tail-end of November after being closed for over 4 months.

Western Australia also opened its doors to the rest of the country on December 8. This has led to a robust rebound in economic activity, with preliminary data for December showing composite PMI jumping to 57.

Moreover, with consumer confidence climbing to its highest levels in over a decade and the household savings ratio hovering at 18.9%, the potential for a more accelerated economic recovery looks relatively likely.

With that in mind, the cyclically-sensitive Australian Dollar may continue outperforming its major counterparts in the near term, if the nation remains virus-free.

From a technical perspective, the longer-term outlook for AUD/USD rates remains skewed to the upside, as price breaks above the Andrews’ Pitchfork median line and psychological resistance at 0.7500.

However, bearish RSI divergence hints at fading bullish momentum and suggests that a short-term pullback may be on the cards.

That being said, with prices tracking firmly above all four moving averages, and the MACD indicator climbing to its highest levels since late September, an extended correction lower looks relatively unlikely.

A daily close above the 78.6% Fibonacci (0.7573) would probably signal the resumption of the primary uptrend and carve a path for prices to begin probing the 100% Fibonacci (0.7628). Clearing that likely brings psychological resistance at 0.7700 into focus.

Alternatively, breaching the December 15 low (0.7507) could neutralize near-term buying pressure and generate a downside push towards support at the September high (0.7413). 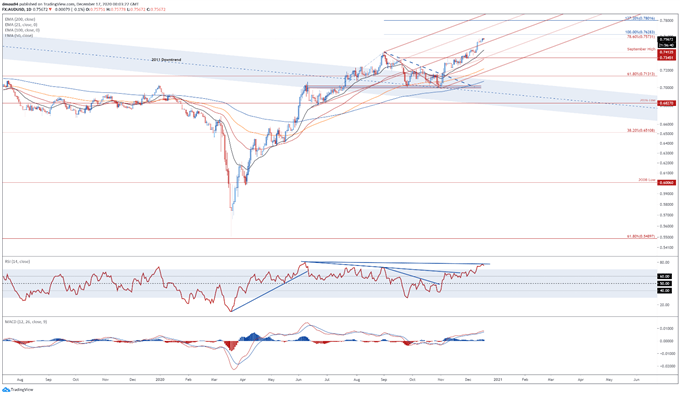 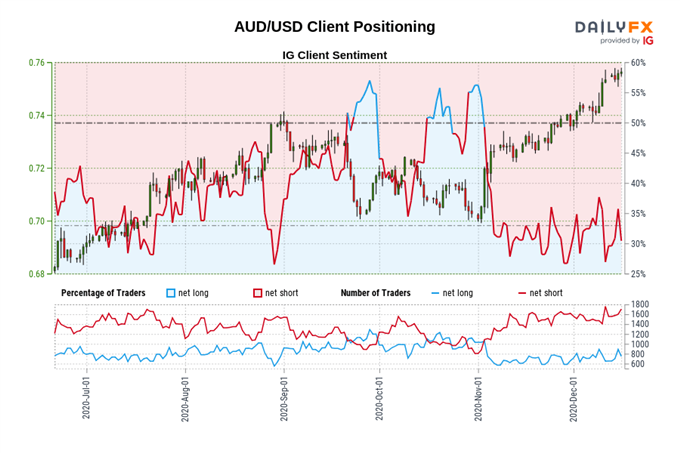