GBP/USD is continuing this week’s advance as hopes rise of a post-Brexit trade deal between the EU and the UK. Note, though, that it remains vulnerable to headlines hitting the news wires from both sides suggesting that either they are closer to an agreement or that the gap between them remains sizeable.

In the latest development, European Commission President Ursula von der Leyen told Members of the European Parliament that “there is a path to an agreement now. The path may be very narrow, but it is there.” However, she also said “it sometimes feels that we will not be able to resolve this question” and she told MEPs that fisheries and the level playing field remain obstacles to a trade deal. 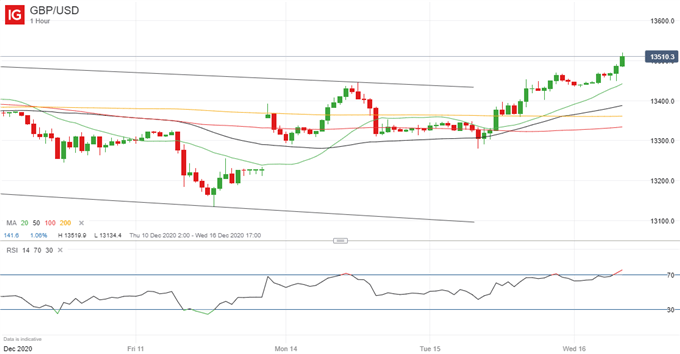 Source: IG (You can click on the chart for a larger image)

With trading in GBP/USD and the GBP crosses so fixated on the negotiations, there was little reaction Wednesday to the latest UK inflation figures, which showed a much steeper than expected fall year/year last month and a drop into negative territory month/month.

The UK’s Office for National Statistics, which compiles the data, attributed the falls to Black Friday discounts by retailers. “The price fall in November this year reflects increased discounting and there have been media reports that some Black Friday sales may have spread further across the month, the ONS said.

Recommended by Martin Essex, MSTA
Introduction to Forex News Trading
Get My Guide