US Dollar Outlook Dictated by Stimulus Talks Ahead of FOMC Meeting

As mentioned in previous reports, fiscal stimulus hopes may continue to limit the haven-associated US Dollar’s upside, as a bipartisan group of US lawmakers unveil a proposal for a $908 billion coronavirus-relief package.

The bipartisan group opted to split the bill into two parts, in order to address the major differences that remain between both sides of the aisle on the issues of liability protections for businesses, and funding for state and local governments.

The first $748 billion relief plan will include the items that both Democrats and Republicans see eye-to-eye on, inclusive of $300-per-week in enhanced unemployment benefits, funding for vaccine distribution and $300 billion in aid for small businesses. While the second $160 billion bill will contain the two elements that have prevented talks from progressing. 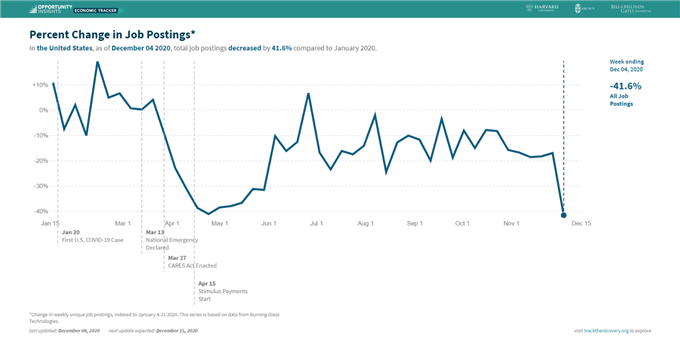 These developments could finally allow policymakers to approve a much-needed stimulus package in the coming days. After all, with total job postings falling to the lowest levels since late April and coronavirus hospitalizations surging above 100,000, further delays could prove devastating.

That being said, it is yet to be seen if Senate Majority Leader Mitch McConnell will put the legislation to a vote, given he favours the $916 billion package brought forward by Treasury Secretary Steven Mnuchin.

Nevertheless, the ability to push through a package containing items that have broad consensus suggests that the provision of aid is relatively likely. Therefore, the haven-linked Greenback could come under further pressure in the near term if Congress are able to deliver additional fiscal support. 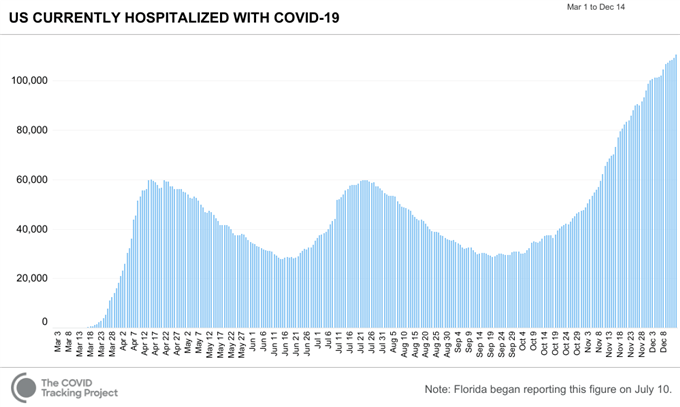 Dovish FOMC to Keep Greenback on Back Foot

However, the upcoming Federal Open Market Committee (FOMC) meeting could give some life to the down-trodden US Dollar, with recent comments from several members suggesting that the central bank will keep its monetary policy settings steady.

Chicago Fed President Charles Evans stated that he is “comfortable with our current setting for asset purchases, and I would be comfortable with that presumably for the next several months, until we get some more clarity on what the economic situation is going to be”.

This echoed comments from St Louis Fed President James Bullard, commenting that “I do think we have a robust program in place right now [and] I don’t see any reason to change at this point”.

Of course, the central bank also noted that “circumstances could shift to warrant such adjustments” to its asset purchasing program. Nevertheless, meaningful progress in fiscal stimulus negotiations may sway the central bank to hold fire for the time being and in turn allow the US Dollar to claw back lost ground in the near term. 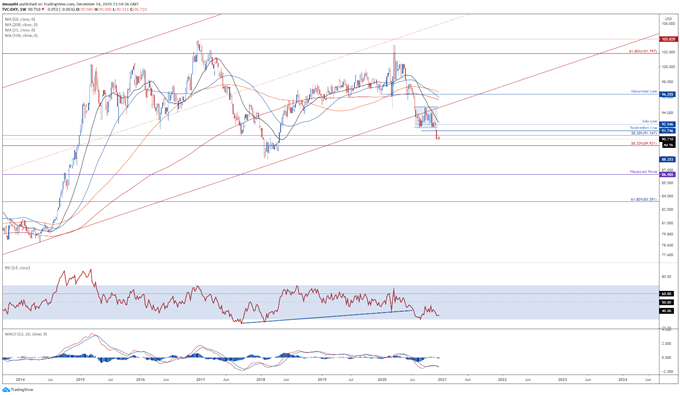 From a technical perspective, the US Dollar Index (DXY) seems poised to extend its 12% fall from the yearly high set in March, as prices break below Bear Flag support and the psychologically imposing 91.00 mark.

With the slopes of all four moving averages notably aiming lower, and the MACD indicator tracking at its lowest levels since 2018, further losses look to be in the offing.

However, bullish RSI divergence hints at fading selling momentum and may inspire a short-term relief rally back towards the September low, if buyers can hurdle resistance at the 38.2% Fibonacci (91.17).

That being said, a more extended downside push seems to be the more likely scenario. A weekly close below the November low (90.47) would probably signal the resumption of the primary downtrend and carve a path for price to challenge the 2018 low (88.25). 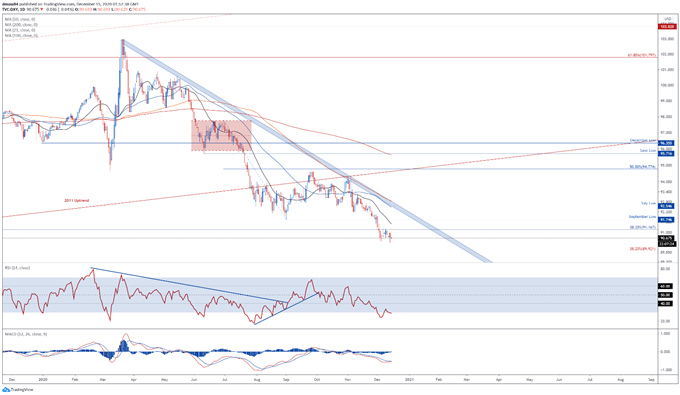 Zooming into a daily chart bolsters the bearish outlook depicted on the weekly timeframe, as prices fail to break back above key resistance at the 38.2% Fibonacci (91.16).

A daily close below 90.50 would likely neutralize near-term buying pressure and drive prices toward the 38.2% Fibonacci (89.92). Breaching that could open the door for price to challenge support at the April 2018 low (89.23).

Alternatively, pushing back above psychological resistance at 91.00 may generate a short-term pullback towards confluent resistance at the September low (91.75) and the downtrend extending from the March highs.