Gold prices extended losses on Monday as Pfizer received emergency use authorization from the FDA, paving the way for a gradual rollout of coronavirus vaccines in the US that aims to create ‘herd immunity’ within the next six months or so. Vaccine developments, alongside prospects for a faster pace of economic opening-up and less reliance on stimulus support, have been among the top factors weighing on gold prices recently.

On a separate note, US lawmakers have decided to split the $908 billion Covid relief package into two separate parts. A larger package of $748 billion, which includes small business loans, jobless benefits and vaccine distribution, has received wide support from House and Senate negotiators. The smaller $160 billion package, which covers key roadblocks such as state and local aid as well as liability protections, may struggle to get passed. In view of a possible partial deal, gold traders are probably unwinding some of their positions built earlier this month in anticipation of a full relief package.

SPDR Gold Trust (GLD) – the world’s largest gold ETF with a market cap of US$ 69.51 billion – has seen its number of shares outstanding shrinking for 9 weeks in a row (chart below). This suggests that redemptions have outpaced subscriptions, reflecting weaker demand for gold among ETF investors. The number of GLD shares outstanding has fallen from a recent peak of 437.8 million on September 21st to 403.0 million lately, marking a 7.8% decline. Gold prices and the number of outstanding GLD shares have exhibited a strong positive correlation of 0.95 over the past 12 months (chart below). Continuous ETF outflow suggests that gold prices may continue along a downward trajectory for the time being. 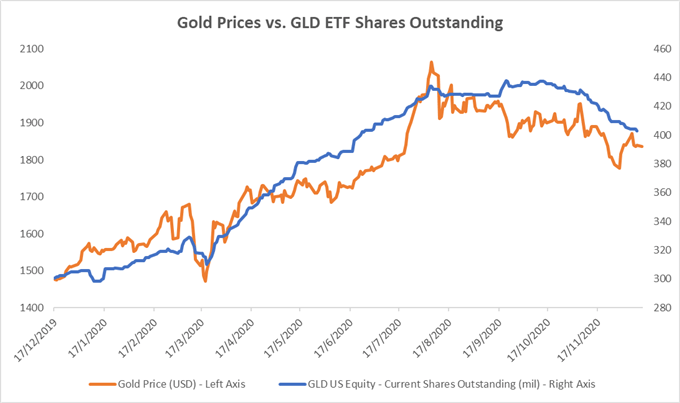 The DXY US Dollar Index, which historically exhibits a negative correlation with precious metal prices, is hovering at a 2.5-year low of 90.70. Their trailing 12-month correlation coefficient stands at -0.76, despite some sort of de-linking from end-September until early December (chart below). A weakening US Dollar, however, appears to offer little support to gold prices in recent months. Investors continued to pull their capital away from precious metals and into risk assets as they reposition themselves for a post-Covid world. 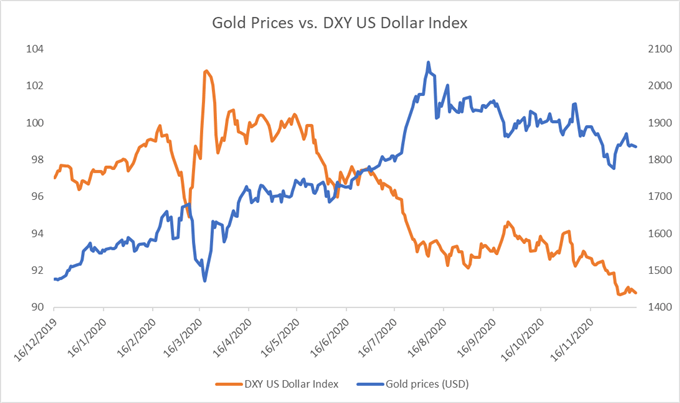 Technically, gold prices are trending lower within a “Descending Channel” that formed since early August (chart below). Consecutive harmonic pullbacks resulted in the formation of lower highs and lower lows – a typical downtrend setup. The bearish trend remains intact unless prices could firmly breach above the upper ceiling of the channel, which is now at US$ 1,870.

IG Client Sentiment indicates that retail gold traders are leaning heavily towards the long side, with 79% of positions net long, while 21% are net short. Traders have added both long (+3%) and short (+5%) positions overnight. Compared to a week ago, traders have largely stayed put on short (+1%) bets while trimming long (-4%) exposure.