The two tedious and neverending narratives regarding Brexit and US fiscal stimulus talks continue to dictate sentiment. On the Brexit front, focus now turns to the upcoming meeting between UK PM Johnson and EU’s Von Der Leyen at 1900GMT. Ahead of the meeting, Michael Gove has fuelled fresh hopes that key differences can be resolved after stating that there can be scope for a compromise on fisheries. Elsewhere, risk sentiment has also been buoyed by reports that US Treasury Secretary Mnuchin presented a $916bln coronavirus relief proposal, although, while House Speaker Pelosi noted that progress has been made, the Trump Administration’s proposal to cut unemployment insurance from the figure proposed in bipartisan talks is unacceptable.

Risk appetite remains firm and thus high-beta currencies such as the Australian Dollar has continued to go from strength to strength. Overnight, the Westpac consumer sentiment index rose to a 10yr high, while the Chinese Yuan had also briefly broke below the 6.5000, which in turn sees the AUD among today’s outperformers in the G10 space. That said, with the psychological 0.7500 handle coming into focus, AUD/USD may start to consolidate with pullbacks likely to find support at 0.7450 and 0.7400. On the flip side, a firm break of 0.7500, opens up a move to 0.7520-25. 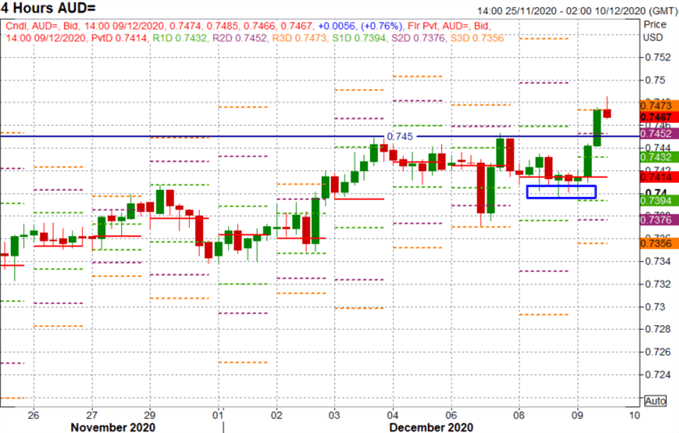 Much like the Australian Dollar, buoyancy in markets have kept the Kiwi afloat, despite trading in overbought levels as highlighted in RSI. That said, seasonal factors as Chris alludes to also remains in favour of NZD gains. However, given the Kiwi’s tremendous strength over the past month, further upside may be somewhat hard to come by with 0.7090-0.7100 remaining a hard zone to break above. Pullbacks thus far have been limited to the psychological 0.7000 handle, as such, with the absence of a weakening in risk appetite, 0.7000 looks to be the short-term floor for now.

For a greater insight into momentum indicators, check out the RSI traders guide 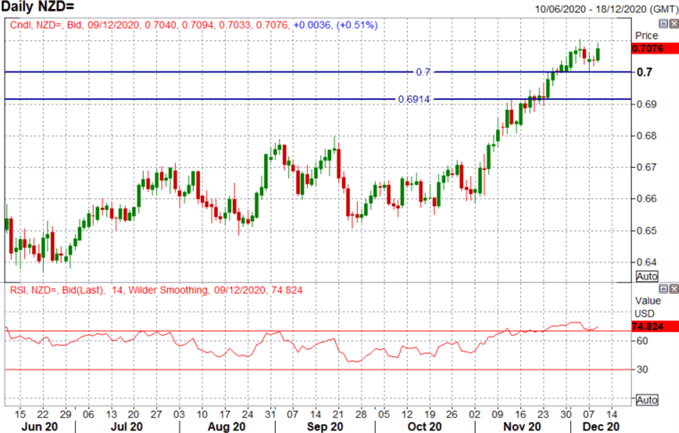